A chance encounter, that’s all it takes sometimes. I found out about Teis Semey and his music from a YouTube video I saw of him performing one of his suites with his ensemble. I decided to send him a message to see if he’d like to hang out and talk about maybe doing a project together. And so we did. On what is pretty much the least suitable time and date.

You see, we had decided to meet somewhere in the winter, here at our studio in Utrecht, that we were just in the process of setting up. So much was still left unfinished, and on top of that, a few days before it had begun to snow. Let me explain – in our climate here in the Netherlands, we almost never get any snow during the winter. Yet this time, it was (to Dutch standards at least) snowing like crazy. Temperatures were at an all-time low, and I decided to pick up Teis at the bus stop where he’d arrive, more than 15 minutes of a walk from the studio. A cold, nasty rain-snow-hybrid came down on us during this walk, yet we actually had a great time talking about music.

After sitting down and warming up for a bit, Teis told me about his plans to record an album with two jazz suites he had written, Japan Suite and Armed to the Teeth. Immediately interested, we decided to plan a date to record both suites in just one day, at the beautiful Studio 2 of the MCO.

We set up early in the morning for the first session, with Teis Semey (guitar), Fuensanta Méndez (vocals), Xavi Torres (piano), Nicolo Ricci (tenor saxophone), Jort Terwijn (double bass) and Guy Salamon (drums). We had decided to record everyone together in the room to give it a true-to-life atmosphere. This, however proved to be a much more difficult task than with classical or other contemporary music, simply because you want to retain all the little details and intricacies of the music, yet also want this live-feeling. To do this, we used a mixture of vintage and modern microphones, to give each instrument its own color and signature, matching the musicians. 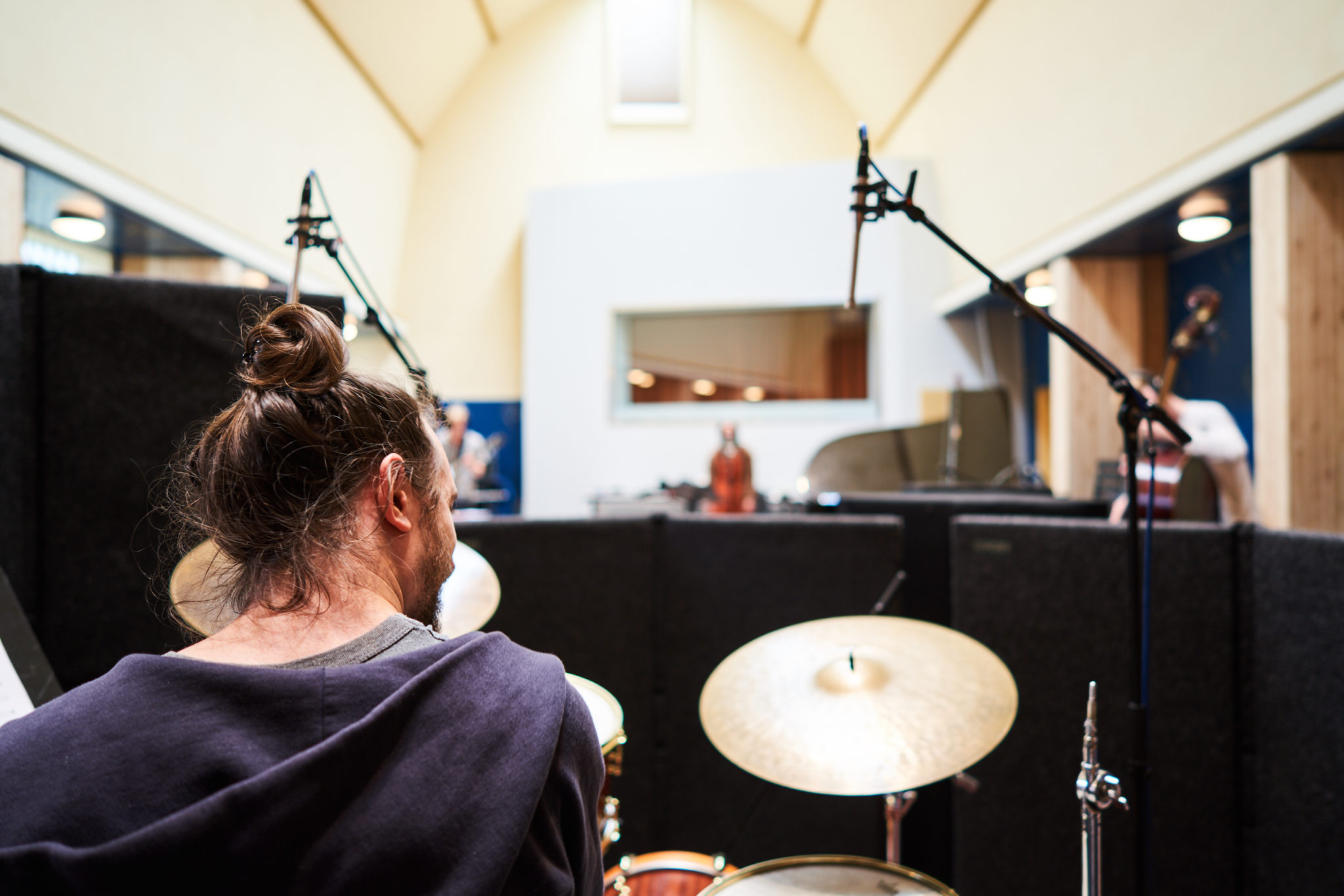 Guy Salamon on his drum kit, with only the two Sonodore omnidirectional mics to pick up his playing.

On drums, we used the Sonodore RCM-401 60v active powered omnidirectional microphones, which also served as a set of room microphones for the other instruments. For Fuensanta’s vocals, we used a vintage Neumann large diaphragm condenser microphone, for piano another set of Sonodores, and on the sax, we used a modern copy of a Neumann U67, also a relatively vintage-sounding mic. The trick here was to authentically translate the huge dynamic range of the ensemble – from whispered spoken word to huge sax solos on top of crazy drum parts – to the recording. 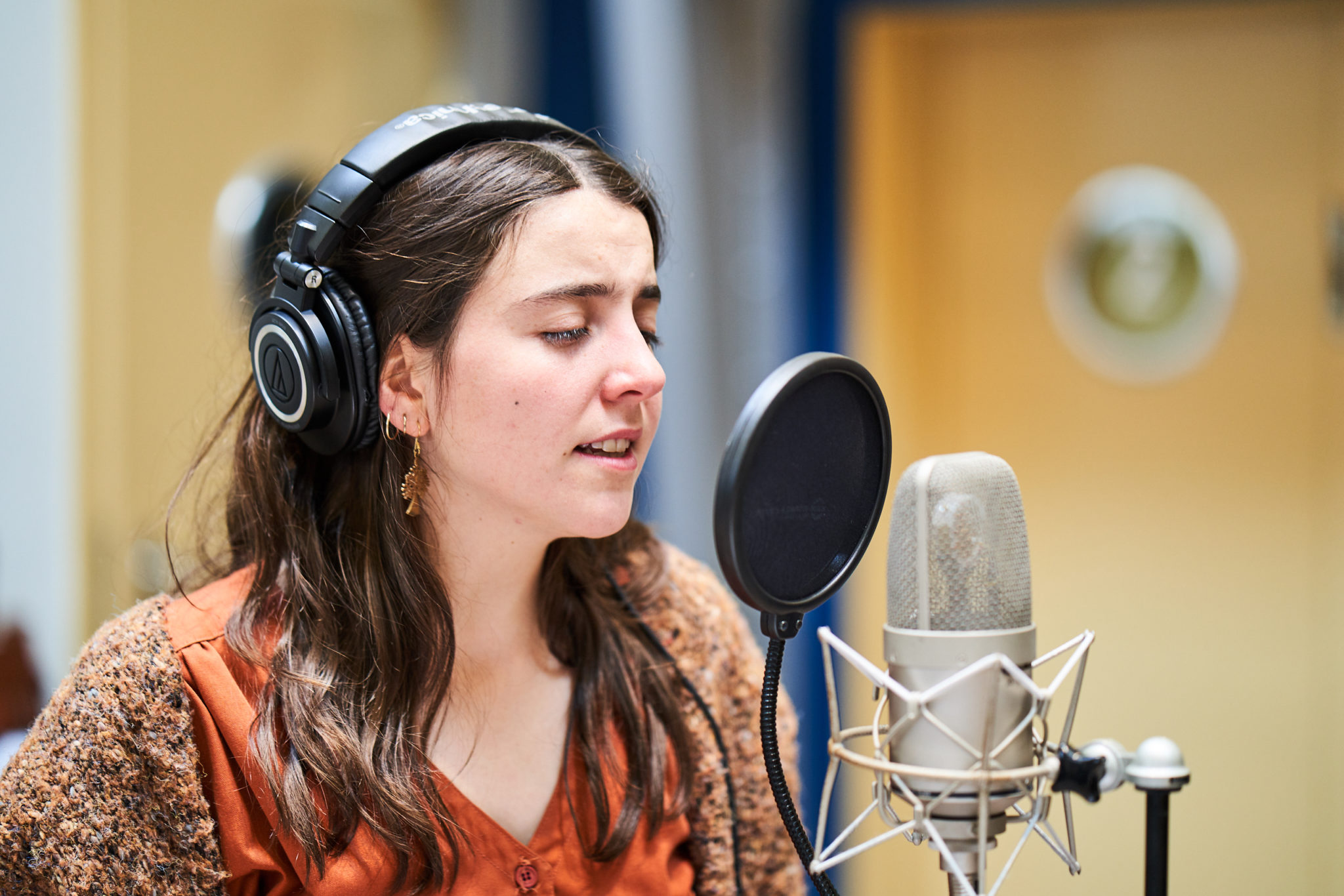 After the session was done, somewhere in the evening, we changed the system around to prepare for what came next – the recording of Armed to the Teeth, with Teis’ other ensemble.

Armed to the Teeth

Armed to the Teeth, carrying a much more raw, rock-like feel, was recorded with a mostly different ensemble. Remaining were Teis on guitar and Jort on double bass, but now with drummer Sun-Mi Hong, alto saxophonist Mo van der Does and trumpetist Alistair Payne. 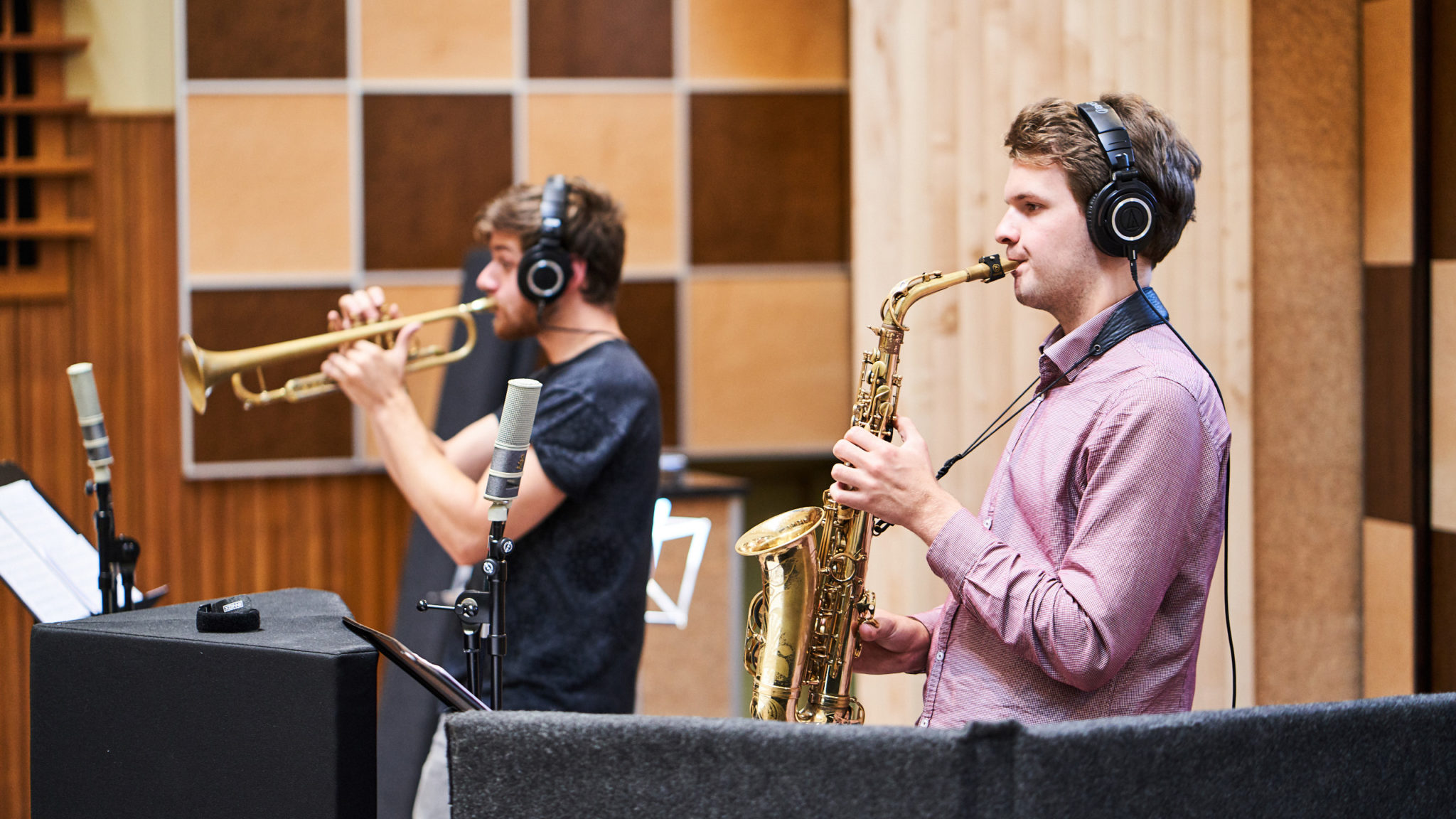 We left the Neumann U67 copy at the saxophone position and added another one for trumpet (these things work well with horns!) the drum mics were left unchanged, as well as the Rens Heijnis modified Neumann microphone on double bass.

What we did add, though, were some additional microphones for the drums, to give them a more rock-like sound. We added a Rens Heijnis modified Neumann KM-104 cardioid to the snare drum, and a Sonodore RCM-401 60v omni to the kick drum. Even though they were mixed in only slightly, it still gave us plenty of extra kick to go around. 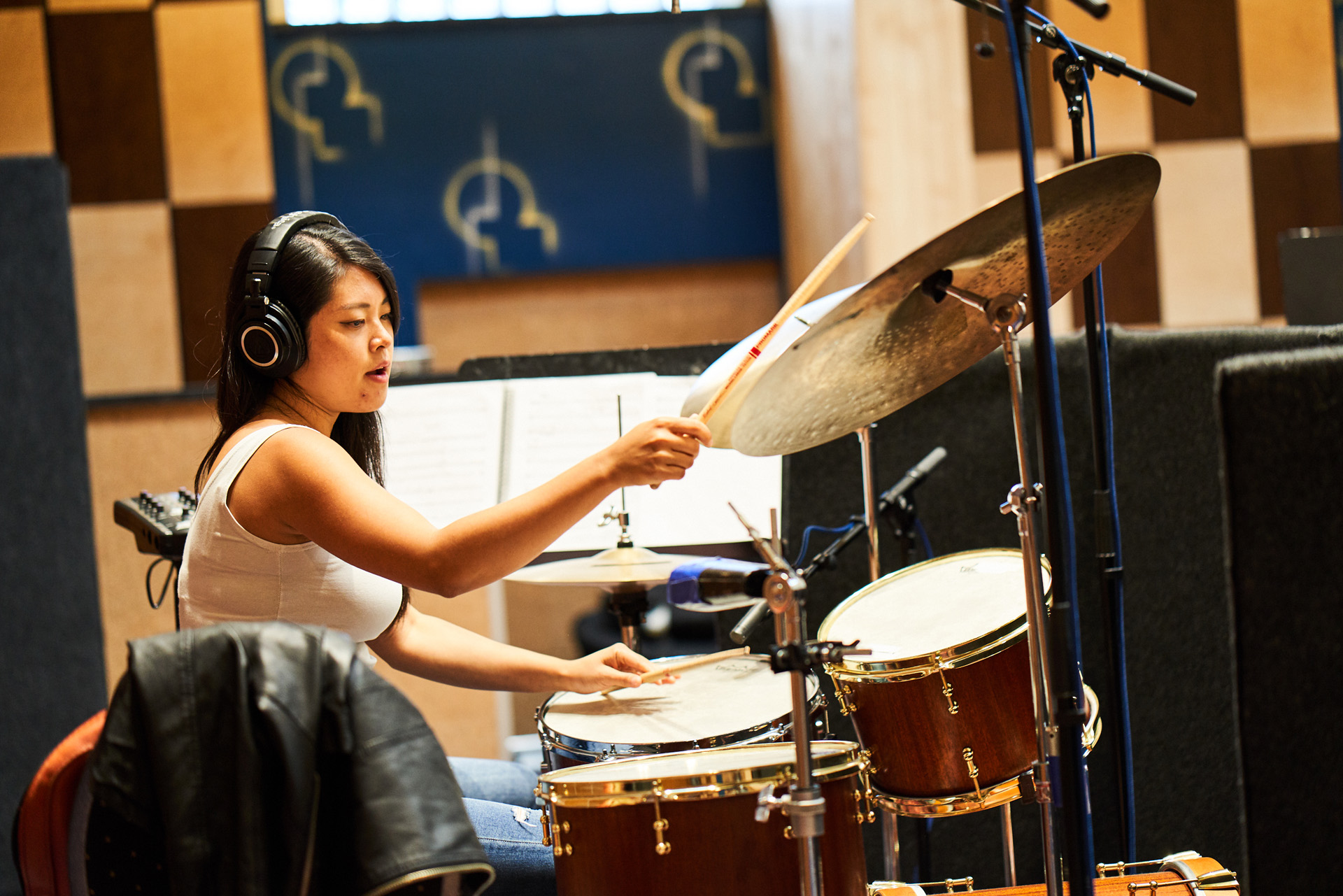 Sun-Mi Hong on the drums for Armed to the Teeth.

It was such a blast recording these two suites. Such vastly different sounds, yet coming from the same mind of guitarist/composer Teis Semey. We’re looking forward to mix this one and make the album happen, so stay tuned!