In the hot summer of 2017, we set out to record a warm, cosy summer album by singer/guitarist Rafael Fraga. The title Trova Caminhada carries different meanings. ‘Trova’ means music, sometimes poetry. ‘Caminhada’ literally means ‘walking’ or even better, ‘outing’. You can therefore see this album a bit as a musical journey through stories and song.

Rafael Fraga’s quartet is comprised of (surprise, surprise!) Rafael Fraga, pianist Aki Spadaro, double-bassist Marko Bonarius, and drummer/percussionist Efraim Schulz-Wackerbarth. Each of them come from a different part of the world and thus bring to the album a lot of variety. It’s not just a fado album, not just a bossa nova album, it’s not even just jazz. It’s an amalgamation of Rafael’s poetic songwriting and the musical workings of these four greatly talented artists. 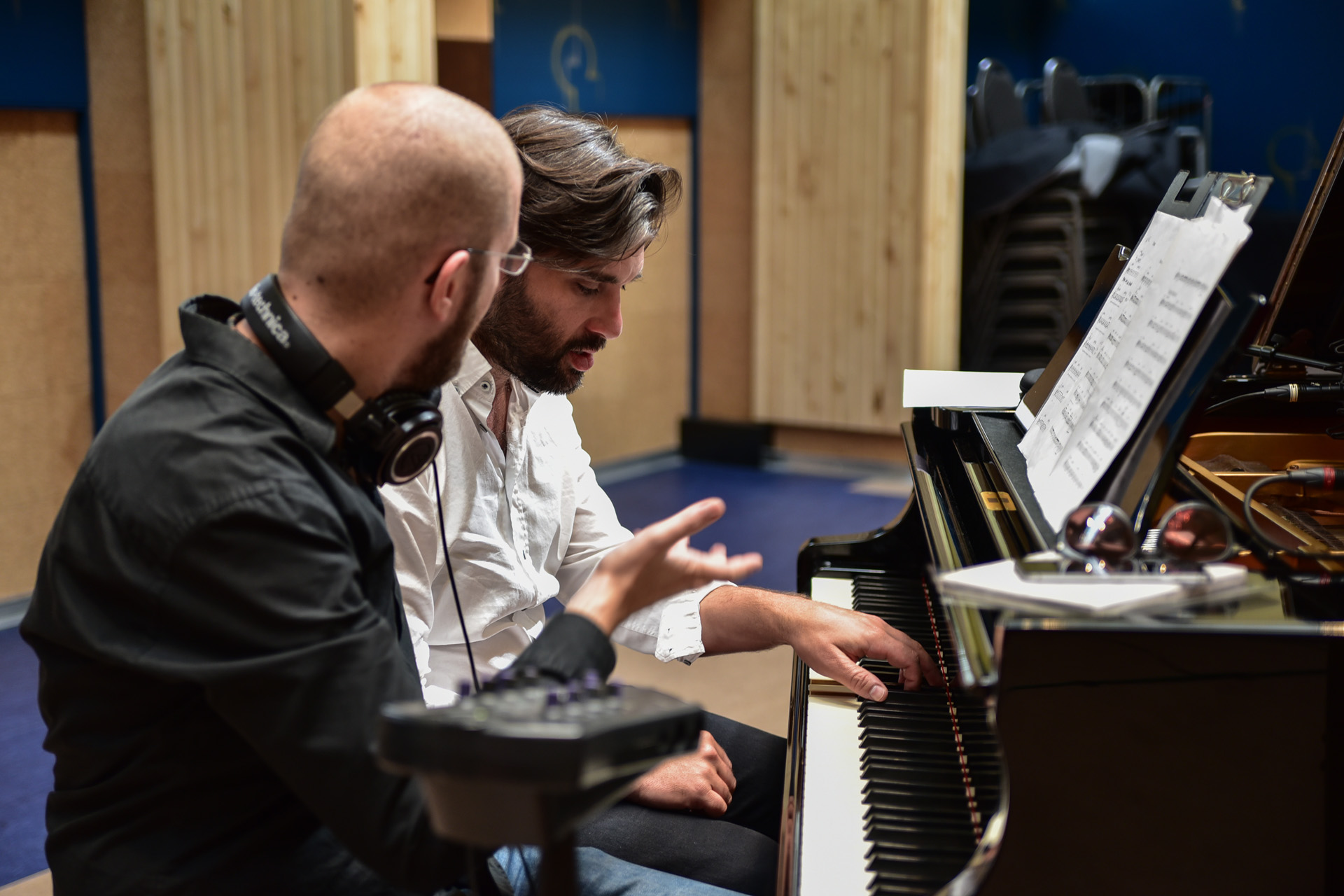 Rafael and Aki discussing the piano parts for one of the songs on the album.

As you might recognise from the images above, we recorded this album at Studio 2 of the MCO in Hilversum. This simply because it’s such a great space to explore the music in a controlled way. There’s ample room, the acoustics are lush and nice, but never overly there. It’s just the perfect venue to record any jazz, and even pop/rock in most cases!

We put the band relatively close to one another, to ensure good visual communication between them. Each of the performers had their own personal monitor mixer so they could make their own balance between the instruments in their headphones.

Equipment-wise, we kept everything to a true minimum. After all, this album is all about a certain natural flow in the music, so why make the recording overly complicated?

For Rafael’s vocals, we used the Sonodore MPM-81 Tube microphone. It’s highly transparent and very neutral, yet it has this shimmery tube sound to it, making it perfect for Rafael’s warm voice. The piano was close-miked with two MPM-81 microphones as well, but in a solid-state variant. It has almost the same sound (very transparent and clear), but without the tube-y sound. On the Neumann, we used a vintage tube microphone to give it a deep and rich tone. It did mean loss of some slight details in it, but for me it was much more important that it would have this warm, deep sound rather than being overly analytical. 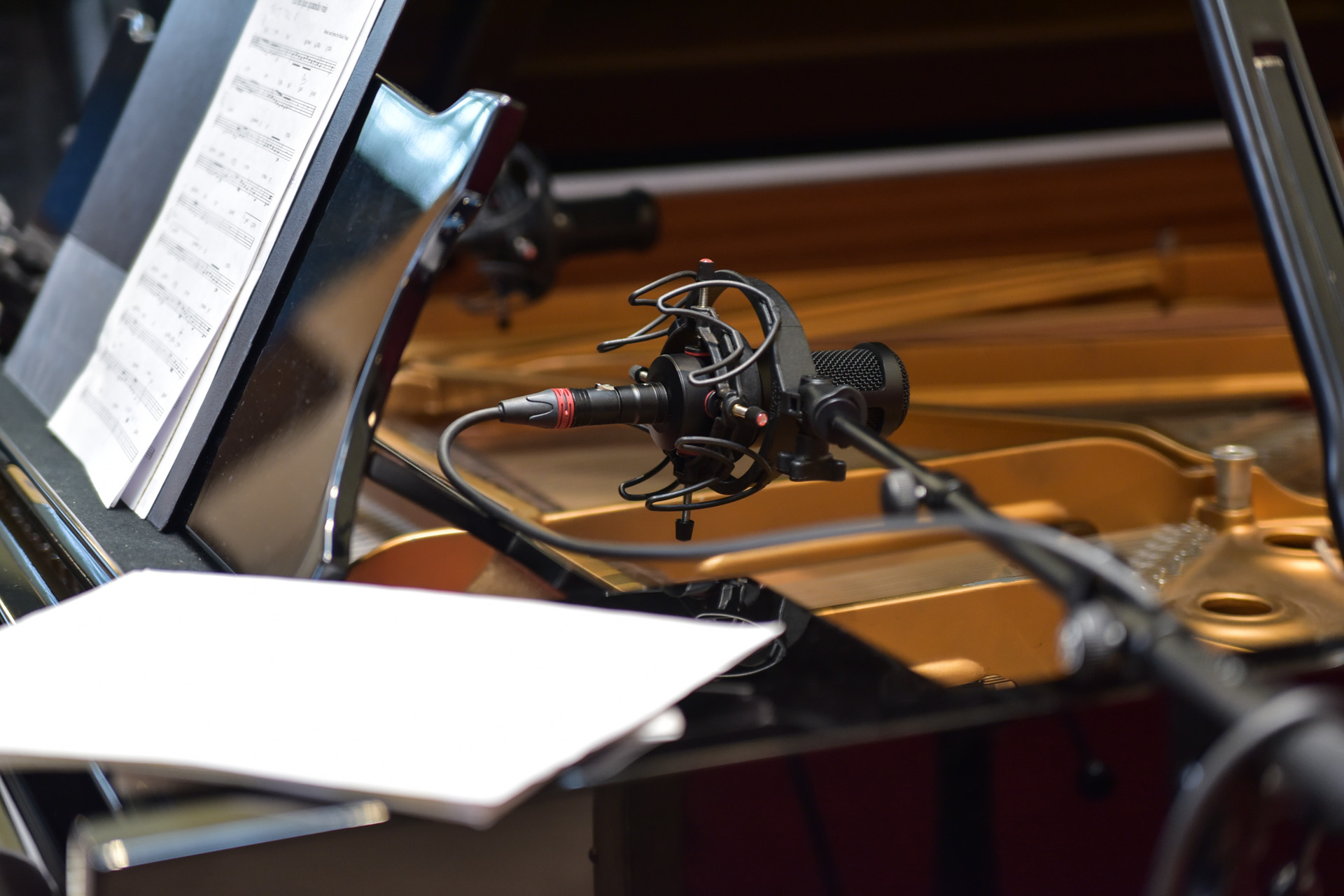 The Sonodore MPM-81 (solid-state) microphones in the piano. Although we close-miked this – they were suspended around 25cm above the strings, we put them on omnidirectional mode to get back a little bit of the blend. For me, this is the perfect equilibrium between intimacy and reality.

Usually, especially in the pop/rock music scene, recording engineers tend to use dozens of microphones on a single drum kit. I never really liked that myself, especially for a sound like this. I therefore decided we use only two Sonodore RCM-401 omnidirectional mics, suspended above the drums (called overheads). To keep the middle part of the stereo image a bit cleared out, we moved them quite far away from each other, as to envelop the other instruments (especially the vocals and Rafael’s guitars). We put another microphone next to the snare drum, but it ended up unused in the mix.

Efraim in action, with the Sonodore RCM-401 omni in the top left corner of the image. Bottom left you can see a little bit of the DPA omni we put on the snare but didn’t use.

Could we have done without the snare mic? Yes, of course – we didn’t even end up mixing it in. But sometimes, it’s good to have this extra level of control. If, for some reason, we got back to the studio and somehow missed some snare drum in the mix, this microphone would’ve saved the session.

Some people find it a dirty word, overdubs. It basically means that you come into the studio at a later point, and add more instruments or vocals that weren’t in the original recording. To me, I don’t think it’s that much of a taboo. Of course, it would be cool to record everything all at once, but the reality is that this just isn’t always possible. Especially for vocals – a singer might want to center his full concentration around his lyrics and melodies, not distracted by his own or other instruments.

We overdubbed the vocal lines back in our studio in Baarn, as well as some small violin and cello parts here and there (thanks to Aili Diewik and Maya Fridman!) to bring out some more lush qualities in the slower pieces.

All in all, we’re super excited about this recording and can’t wait to mix and master it, and of course, share it with all of you!