TRPTKs very first orchestral recording. All our separate team members (of course, just counting the production team) have done orchestral recordings elsewhere for different labels, but this was the first time we got to record something this big in TRPTKs house style: minimalist, purist, audiophile.

The album we started recording contains two cello concerti by Dutch composer Jan-Peter de Graaff, with whom we’ve worked with countless times before. One of these concertos, No. 5 “The Forest in April”, was the one we’ve just recorded. The other one will hopefully follow this summer, if the pandemic allows us. The concerto is all about nature, mankind, and the destructive, non-natural relationship between the two. The orchestra (the North Netherlands Symphony Orchestra) represents the first pristine nature, later to be corrupted by the human element, represented by the cellist, Maya Fridman. In the second movement, the solo cello plays a minute-long cadenza, which, when the orchestra comes in, is repeated, mimicked by it, slowly turning darker and darker. After the explosive ending of the second movement, the third, Requiem, starts, where you hear the burning embers of the forest that remains. 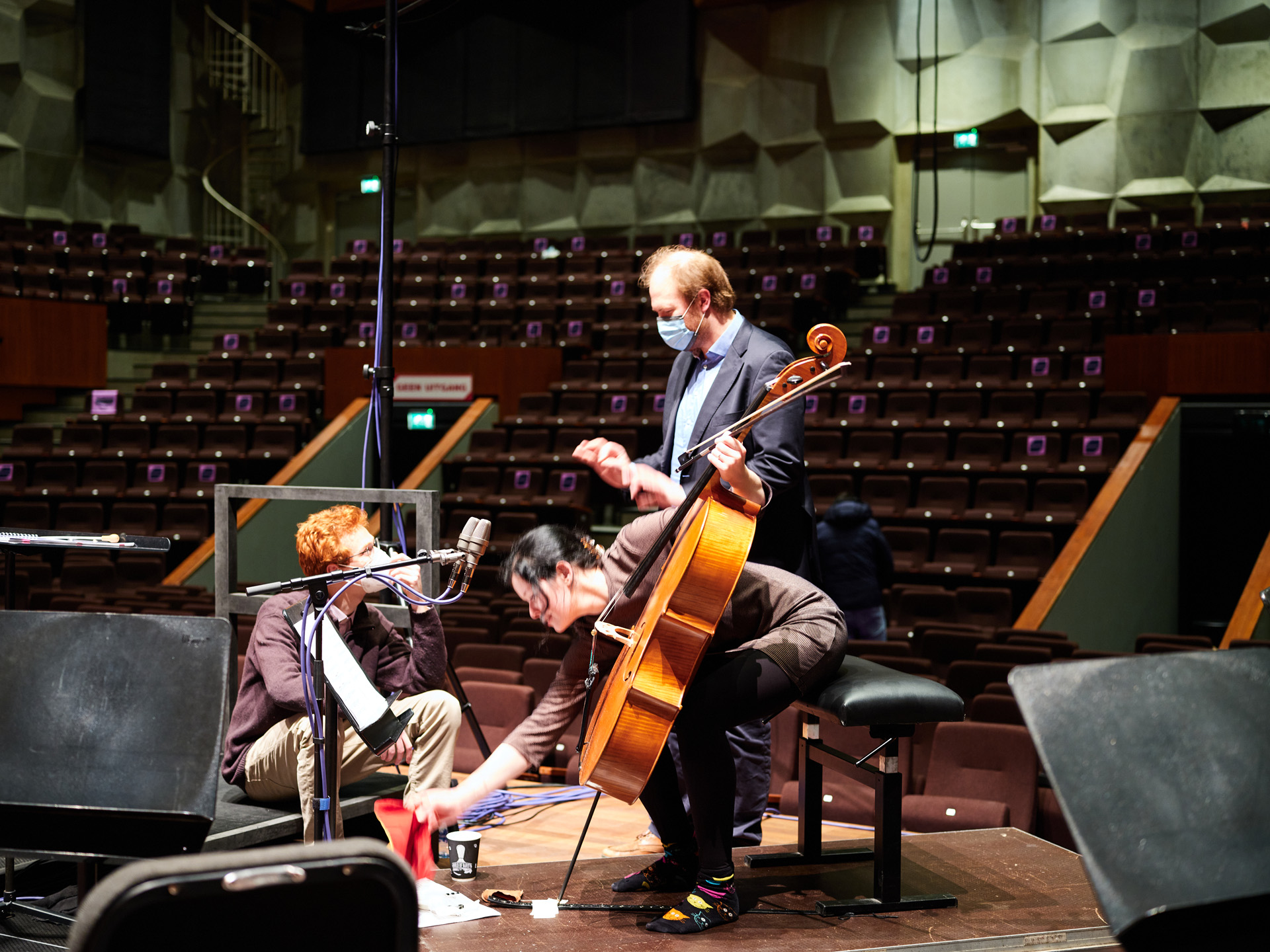 We were honoured and thrilled to get to work with not just Maya Fridman, but also the venerable North Netherlands Symphony Orchestra, led by young Italian-German conductor Nicolò Foron. And not just that, we were excited to get to record at the beautiful Grote Zaal (large hall) of the Oosterpoort in Groningen, all the way up north in our country The Netherlands. It’s a medium-sized concert hall with excellent acoustics for contemporary music, as it’s not overly acoustic so it never disturbs the balance of the direct sounds coming from the orchestra and soloist. 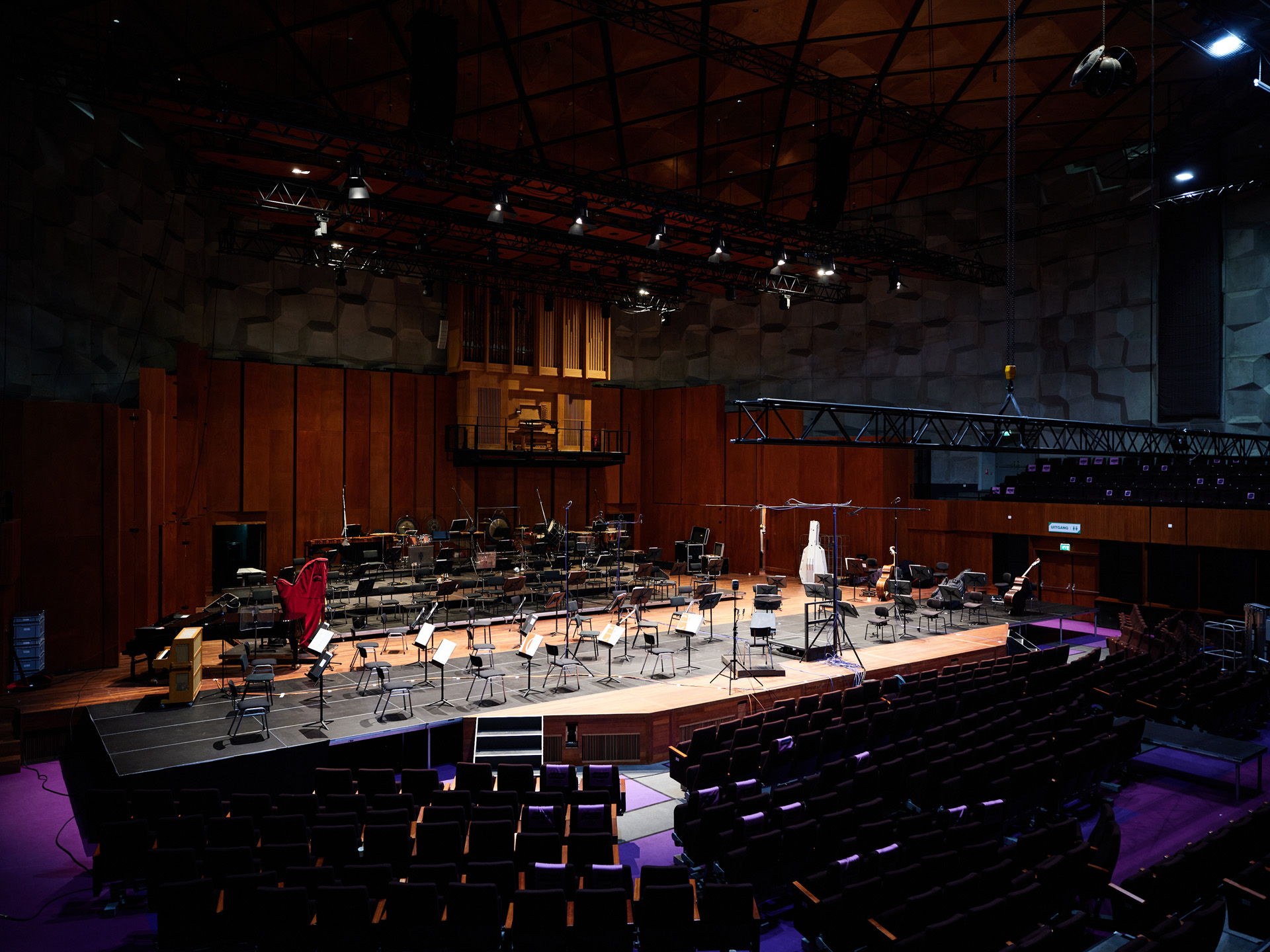 The Grote Zaal (large hall) of the Oosterpoort in Groningen. In this picture, you can see our relatively minimal / purist microphone setup.

As stated above, we opted as usual for a relatively minimal and purist setup. Our five main microphones (DPA 4006A omnis) made up for 99% of the mix, only blended subtly with three microphones placed near the woodwinds towards the back of the stage. Due to the coronavirus measures, orchestra members had to sit at least 1.5 metres away from one another, putting the woodwinds farther back than I’d usually prefer. This deep LCR setup comprised of three DPA 4015 subcardioids was subtly added to the mix to help balance out the woodwinds with the string. To gain a bit more clarity in the first violins and double basses, so-called outriggers (in this case more DPA 4006As) were added, around 4 metres away from the main microphone system. Lastly, by using the cardioid DPA 4011A microphones we had at our disposal, we spotted the basses, percussion, harp and celesta in case we’d need more of them in the final mix. We ended up putting them in very low and deep in the mix, as to not disturb the great natural balance of the main microphone system. 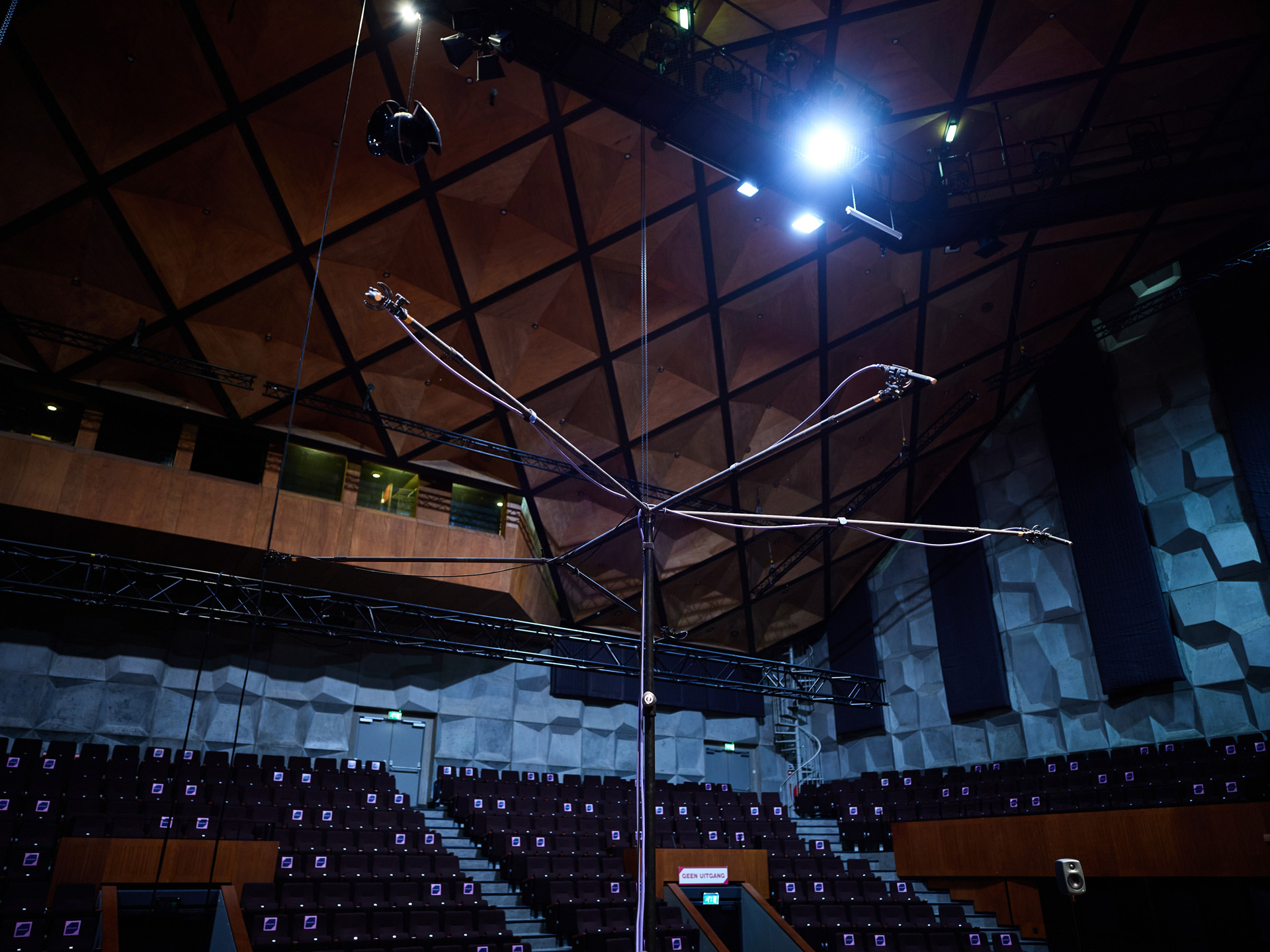 Our main microphone array, accounting for pretty much 99% of the final mix you hear on the recording.

Which brings me, Brendon, to what irks me most in orchestral recordings I see are made everywhere around the world. Too. Many. Microphones. Let me explain.

When you add up two microphone signals, not only do you add the noise of both microphones (which can lead to a whole lot of troubles in itself), but you also get two impulses. Say, a violinist is playing 1 metre away from Mic A, and 2 metres from Mic B, then the sound coming from their violin reaches one mic roughly 3 milliseconds later than the other, creating a double impulse. This blurs the sonic image of the violin, and can possibly create comb filter issues as well. Things get even worse when adding, say, four or five microphones to the mix. Suddenly you get five impulses from one instrument, each at different intervals. Now, multiply that by an entire orchestra… And that’s not even the worst case scenario. I’ve seen orchestral recordings with over 20 microphones placed on stage.

To the technically astute of you, yes, of course, when mixed well, you shouldn’t have too many issues in that regard. Sure, the soundstage gets blurrier and comb filtering may subtly appear, but the real “fun” starts when these signals are mixed in too loud, which I’ve seen done more often than not. This is the reason that if we use more mics than just the main microphone system, we make absolutely sure that they’re very deep down in the mix as to not interfere with the acoustic balance. We don’t solve balance issues in the mix, that’s what the recording session is for. If the balance doesn’t work, move around some of the players in the ensemble until they do. 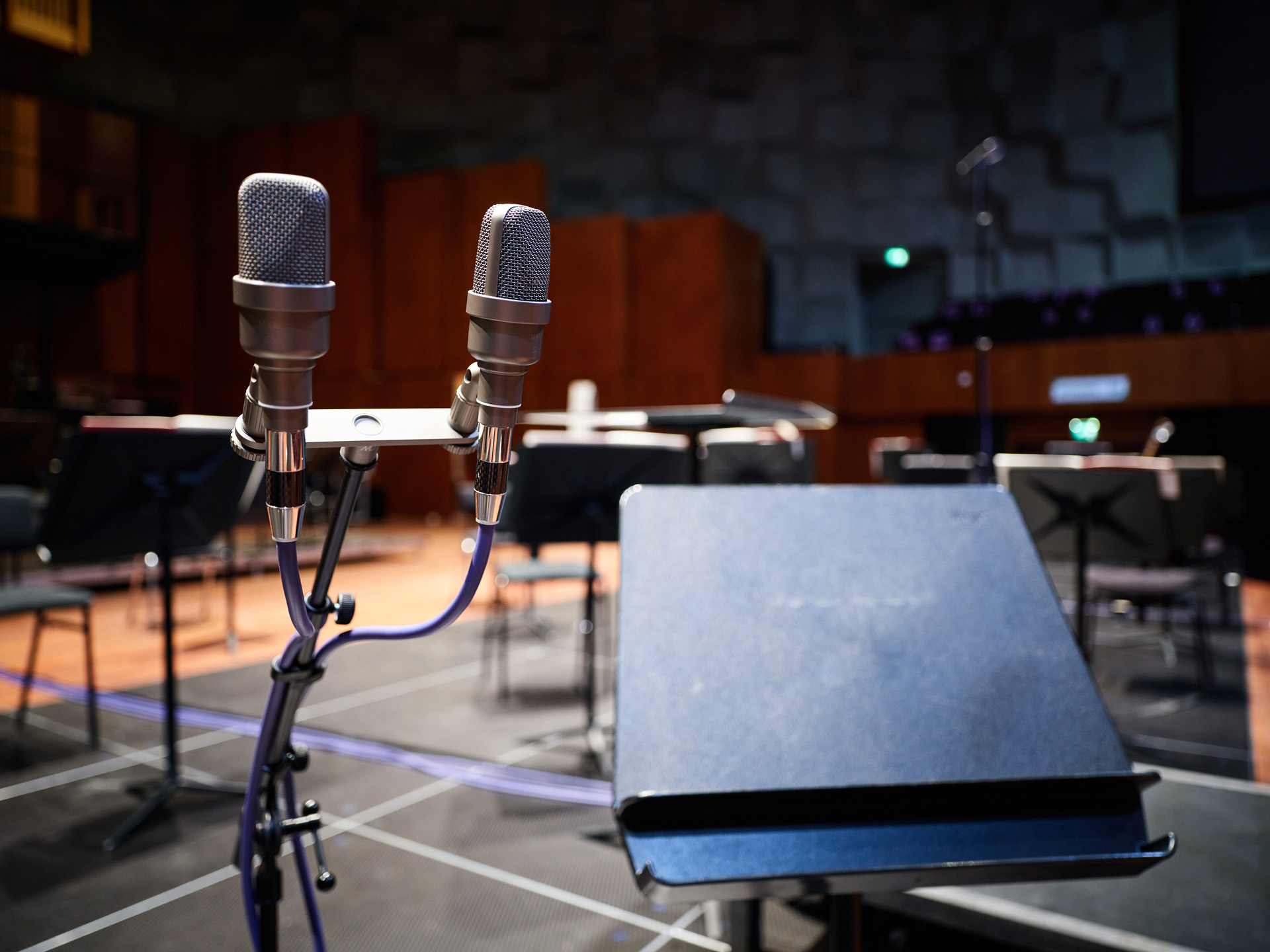 The two Microtech Gefell M930s we used on the cello solist.

Sometimes you do have to use additional microphones, for instance on the soloist. You generally do this for two reasons: positioning of the instrument in the soundstage, and spotting it when needed. By positioning, we mean that, because usually the soloist sits next to the conductor (in this case 1.5m away from him), they’re slightly off-centre. In case you’d want to correct for that, you could add one or two microphones and carefully pan them to correct for this slanted sonic image. 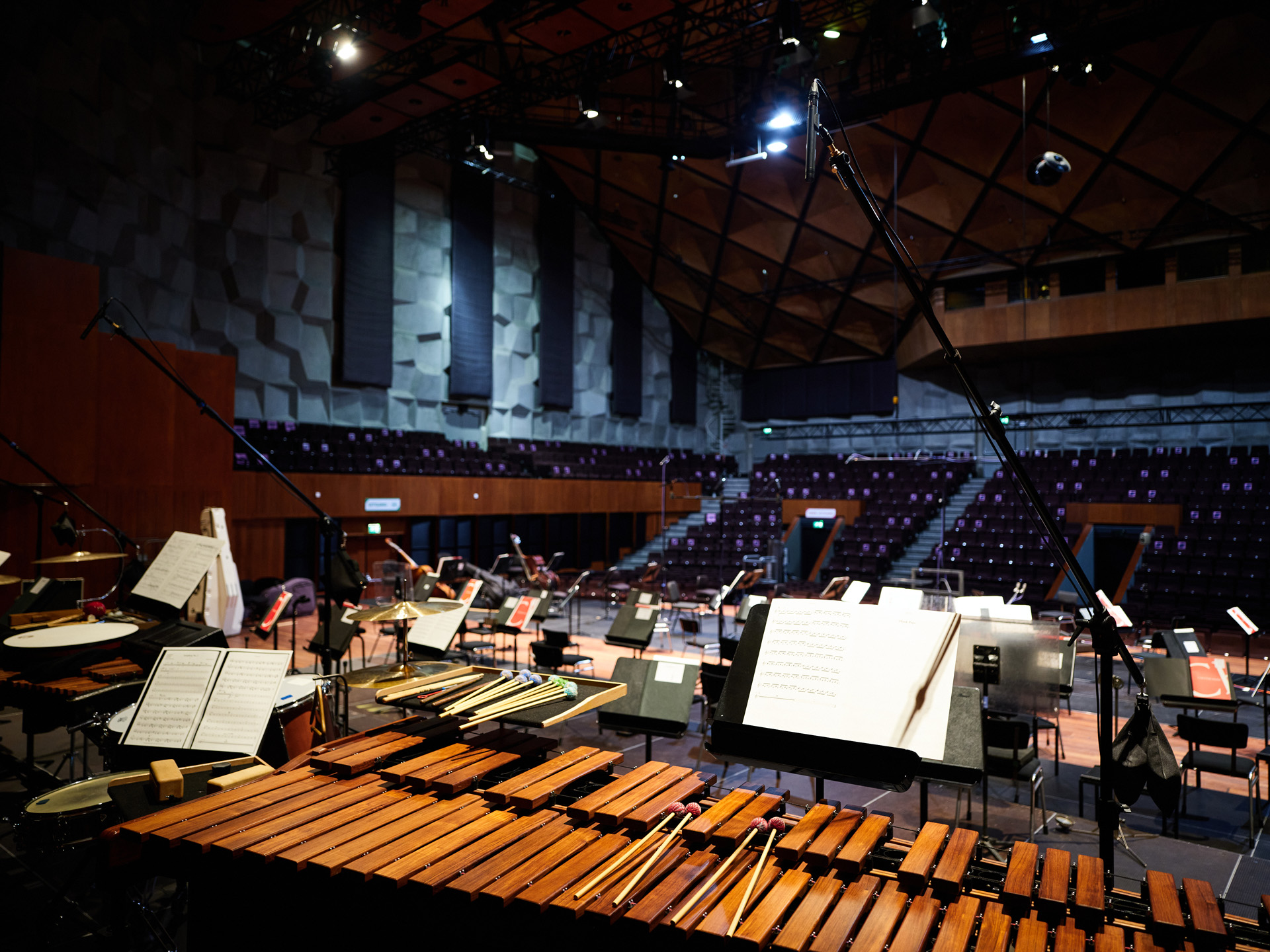 To gain some physical slam (“oomph”) back from percussion way to the back, we’ve added some DPA 4011 cardioid spot mics to help make percussion a bit more punchy again.

On to the second half!

Now we’re done with The Forest in April, we’re excited to (hopefully) record De Graaff’s concerto No. 4 “Rimpelingen” in the summer. Fingers crossed!