I have this weird obsession with trying to make a mix as pure as possible, mixing in spot mics only if absolutely necessary. This obsession, like many of my habits I created over the years, at the university where I studied at. Aside from having the luxury of studying under some of the most knowledgeable people in the field, most students do not have that much gear so you’d have to make due with as little as possible. At some of the (pop/rock) studios I’ve worked at in the past, the opposite tendency was usually well-represented — an acoustic guitarist would sometimes have five, six, or even eight microphones all around them, as the final “sound” was made on the mixing desk rather than acoustically.

I’ve never really understood why, to be honest. Yes, setting up a large number of mics means that one of them will probably have a decent sound in it, and you can mix them together to get some kind of representation of an acoustical balance. But it’s never the same as just a good main set of mics, no mixing, no editing, just plain and simple. By mixing signals with different timings and characters, you run the risk of adding distortions, interference, and weird phase issues to your precious mix. And yet, so many of my esteemed colleagues do exactly this, even for classical music. Rather than having their main array serve as 99% of the sound, it’s mixed in with all the spot mics that are used, to create something often artificial-sounding. Of course, there are a few engineers out there who enjoy the minimalist approach; with Morten Lindberg from the Norwegian label 2L as the most famous example. He never uses any spot mics, but instead he tweaks the entire setup and layout of the ensemble in such a way he doesn’t need them.

So why am I yapping on about this all? Well, that all has to do with how I approached the recording session with Kersten McCall and his fellow musicians, for their album B.ACH.

Kersten and I decided to record this album (featuring works written and arranged for flute in various combinations with harpsichord, cello, violin, and other flutes) at the beautiful Waalse Kerk in Amsterdam. Right in the city center, this church brings ample acoustics to the table. But it’s also the kind of acoustics that don’t hide any details in the music, giving you a very clear sound against a warm background, so to speak. And because the album consists of seven different ensembles, these acoustics give you the glue that holds the album together. I challenged myself to record the entire album in such a way that I would not need to mix any signals together, to get the purest sound possible in order to hear the ensemble as though they’re in your living room. 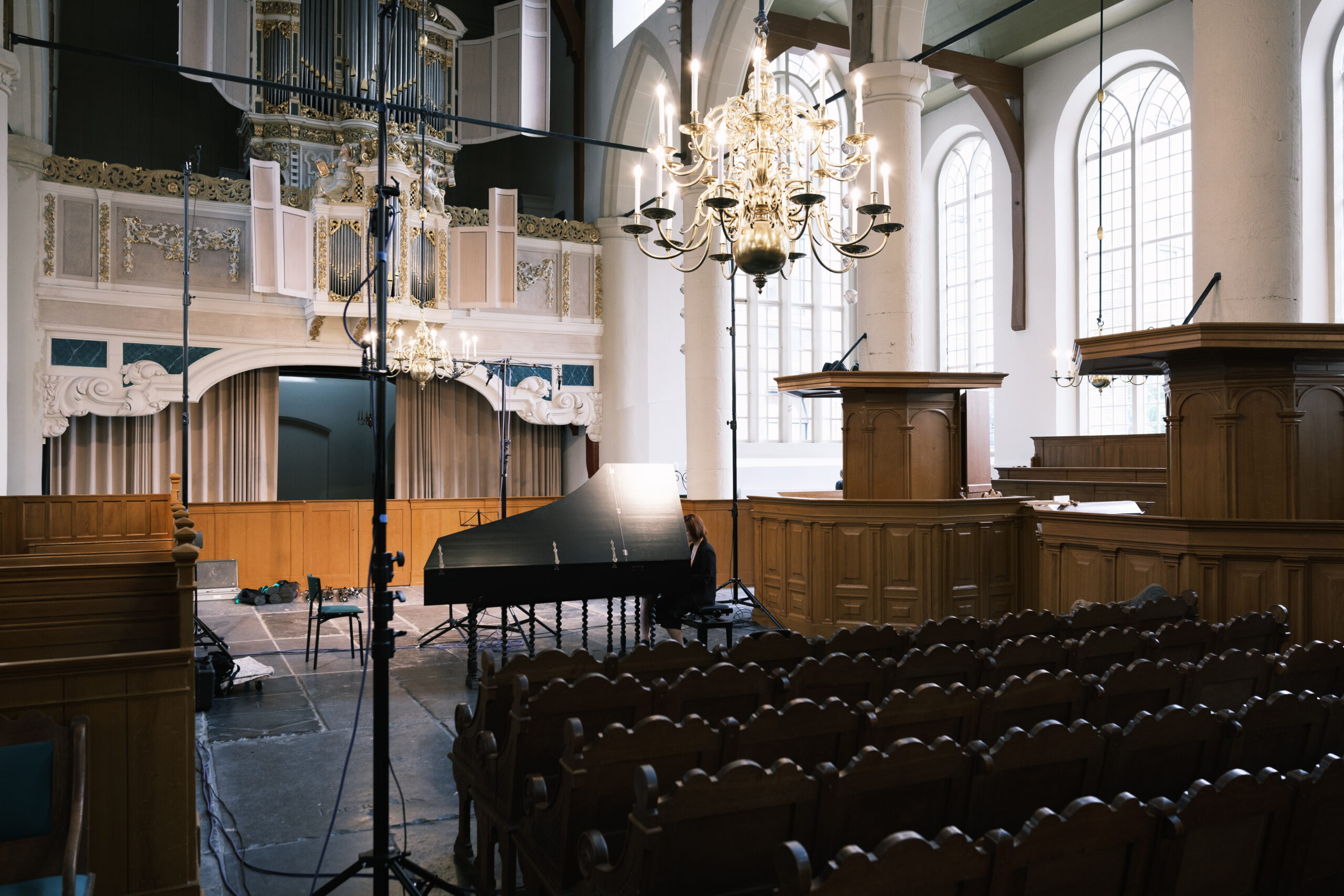 An overview of the recording setup at the Waalse Kerk in Amsterdam. In the middle of the rather large space, a single main array of microphones was set up, just behind the harpsichord.

Not every space lends itself well for these types of recordings, of course; much more emphasis will lie on the acoustics of the space, meaning that if the acoustics are bad, the recording will be bad.

The main mic array consisted of the DPA 4041SP large diaphragm omnidirectional condenser microphones for channels Left, Right and Center, and the surround and height channels consisted of all DPA 4006A small diaphragm omnidirectional condenser microphones. Each channel was routed directly to each output channel, so no mixing of these signals happened. We kept this entire setup for almost the entire album, just shifting around the musicians in order to attain a good balance between each musician. In only one piece I did end up setting up spot microphones (one on cello and two on harpsichord) because there wasn’t enough time to really make sure everything was set up perfectly, but fortunately, we didn’t have to mix in the spot mics; the balance was already perfect in the main array. 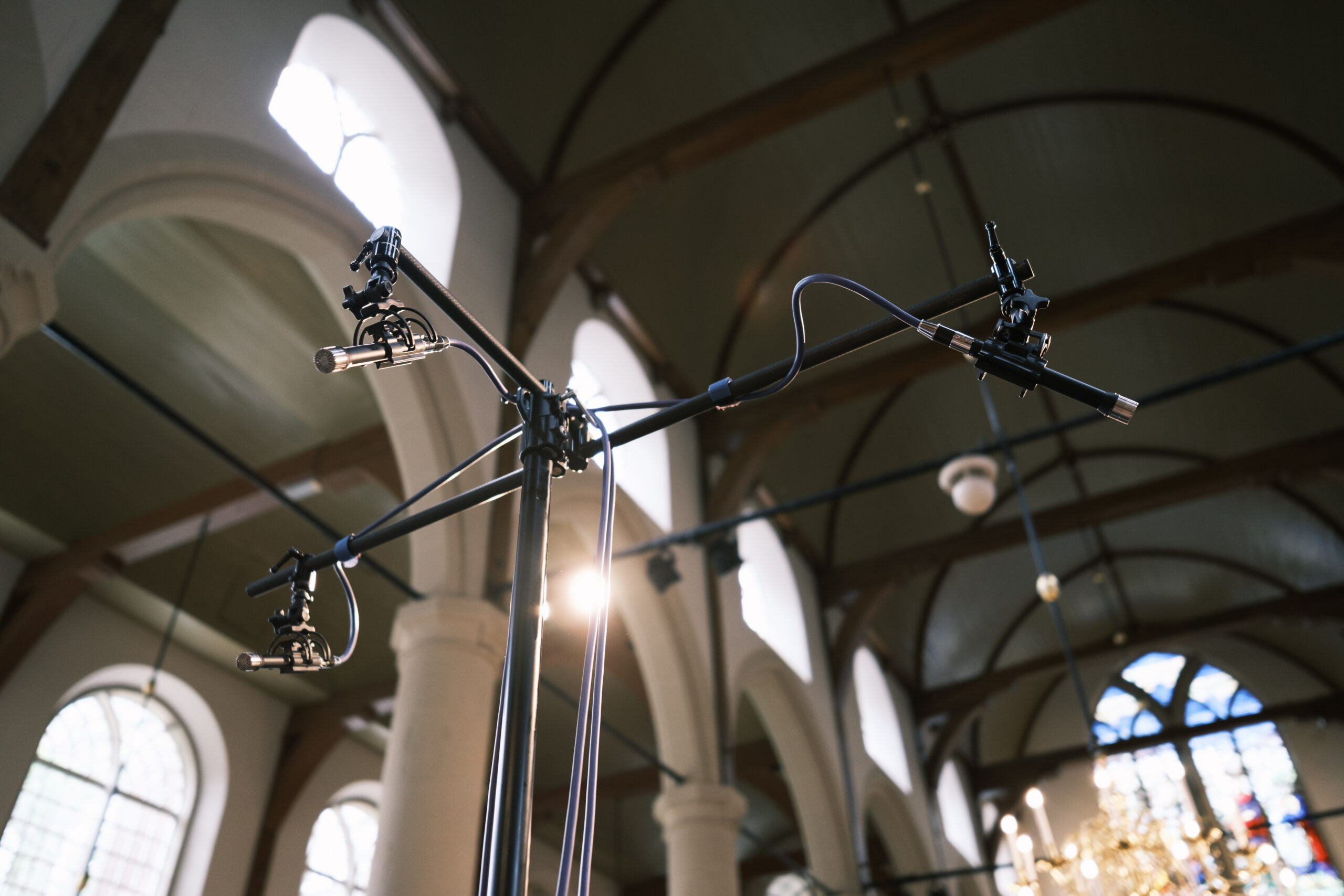 Our DPA 4041SP large diaphragm omnidirectional condenser microphones set up in OOA configuration; a triangle with a width of 120cm and a depth of 22cm.

What’s great about these large diaphragm mics is that they have quite a bit of directionality in the upper frequency range. This means that by just simply adjusting their rotation, angle and position, you can greatly alter the sonic balance and character, without adding any additional mics. In this case, we turned around the main left microphone to face the cello to give it a bit more clarity. For each ensemble, we also added podiums of various heights to get the musicians closer to or further away from the main mics; also in an effort to adjust the balance and make it perfect in the main mics. These are just some of the tweaks one can do rather than just simply adding another microphone and trying to piece it together in the mix. And the result is often much better than any mixed-together recording!

Connecting it all together

When all mics were set up, it was of course time to connect everything together and run these lines into our recording system. The microphone signals were amplified by Millennia HV-3D-8, high-end eight-channel Class A microphone preamplifiers, which were connected to our trusty Merging Technologies Hapi MkII running at DSD256 (11.2MHz 1bit). We really love the purity and clarity in sound this combination of high-end amplification with DSD recording gives us, which is why we’ve been working in this manner from early 2021. 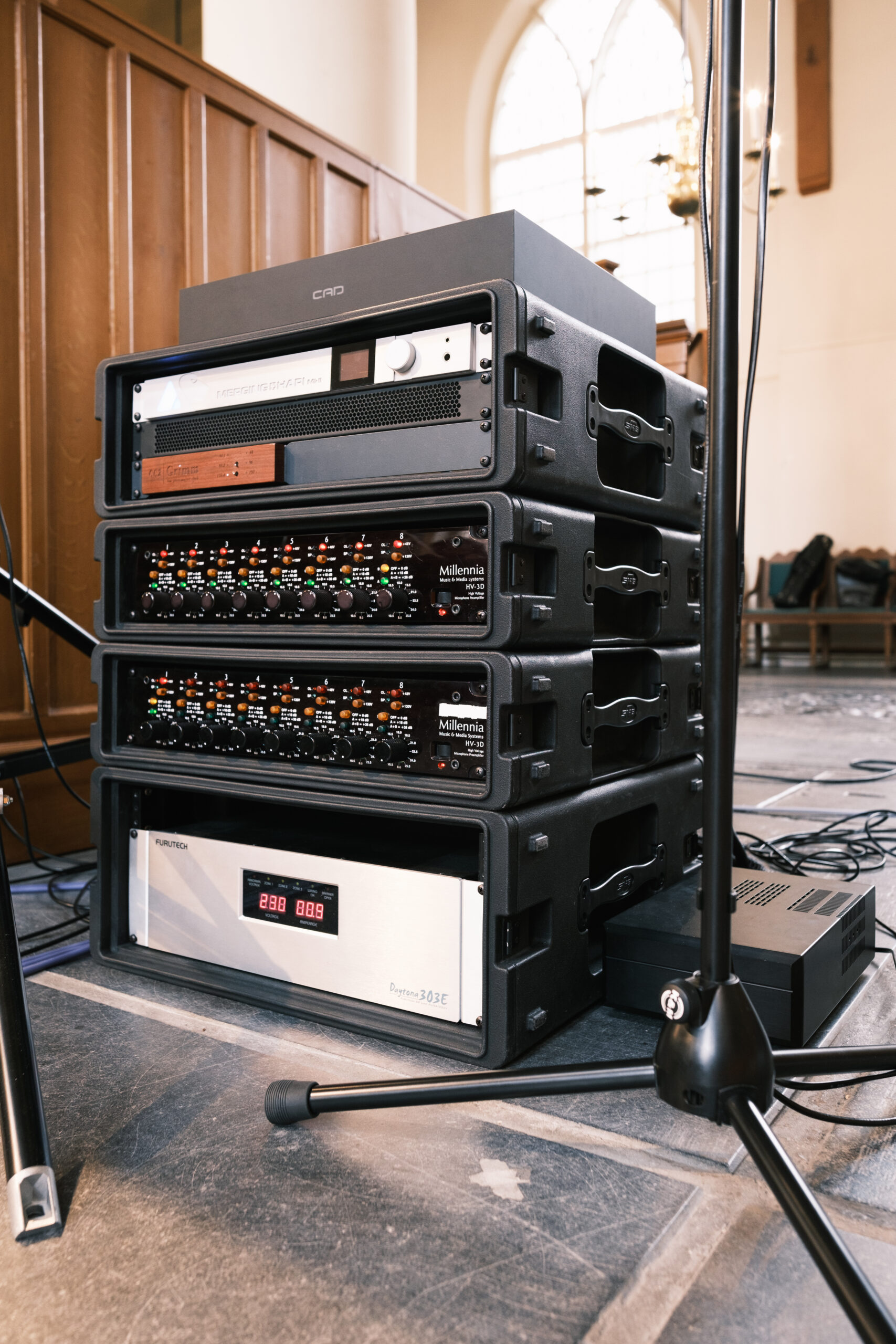 Now only one thing matters: the music! We just wrapped up the second and final session for this album and are excited to get to edit, mix and master this album. We can’t wait to share it with you.