The Fiery Angel. What’s in a name? The story of The Fiery Angel, written by Russian author Valery Bryusov, revolves around the love triangle between the beautiful but wicked Renata, the knight Ruprecht, and The Fiery Angel himself. The story is dark and occult, and so this arrangement by Maya Fridman of Prokofiev’s famous (or, infamous?) opera needed to be as well.

Aside from Maya’s historical cello, we had the honour of recording a very special piano too. The Érard concert grand piano that pianist Artem Belogurov performed on for this recording, was built in 1880 and was played on by none less than Gustav Mahler. Owned by composer Alphons Diepenbrock, it resided in Amsterdam for the entirety of its life. However, it was taken to Hilversum for this very special occasion. 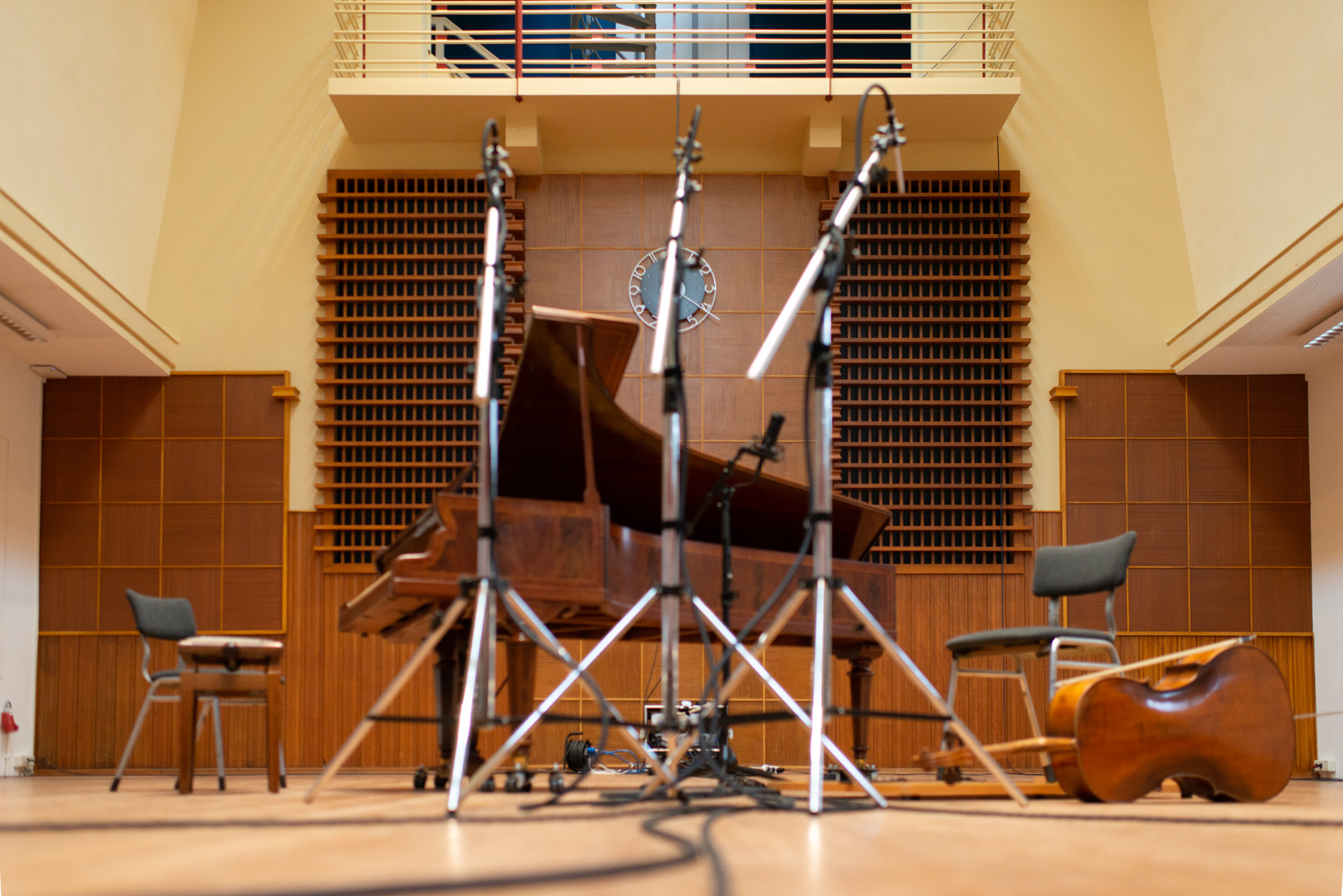 The 1880 Érard concert grand in its full splendour.

So why choose such a historical instrument for this modern composition? Well, that has a lot to do with the music itself, actually. When Maya arranged (or rather, recomposed) this opera to a chamber music duo, she didn’t want to let go of the important details you hear in the orchestral score. And thus, the music is quite densely scored, especially in the piano. With melody lines as well as deep and low chords all being played at the same time, you really need a piano that can handle not only these dynamics, but also not muddle up the sound.

An Érard (or any straight-strung grand piano) is perfect for that. Because all the strings in the piano are perfectly parallel and not crossing each other like in modern grand pianos, there’s an incredible amount of clarity in the sound, especially in the low end.

Now, the piano is not easy to play on. Modern grand pianos are often built to provide the player with a sense of comfort, and generally are more forgiving for playing errors. But being an early-keyboard expert, Artem really knew how to handle the piano and get the best results out of it. 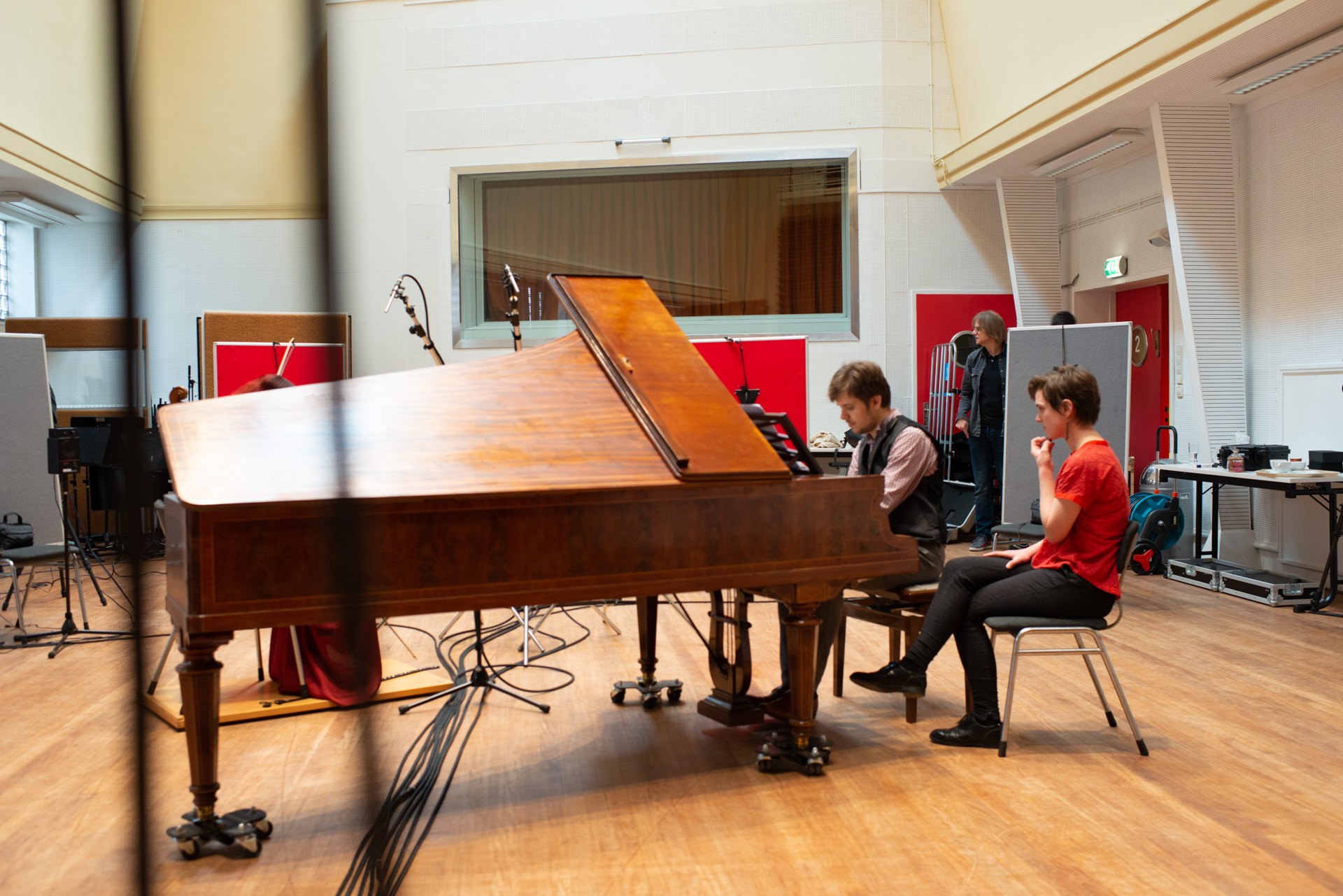 The Érard in Studio 2 of the MCO in Hilversum.

All of that said, a piano like this should be in the perfect room for the music as well. And so we went on a quest for a recording venue that not only was quiet enough for this ultra-dynamic piece, but also had a reverb that didn’t muddle up the sound either.

We record quite a lot of music at MCO Studio 2, mainly because it’s relatively dry so perfect for when you don’t want too much reverb, but also because of the control you have over the acoustics. For more details about the room itself, I suggest you read the recording blog Paper Motion, for example.

For this recording, we used a main microphone system of three Sonodore RCM-401 60V active-powered microphones, and the BLM-21 (also by Sonodore) boundary layer microphones for surround. These Sonodore microphones provide a very clear and natural transparency, making them perfect for a recording like this. 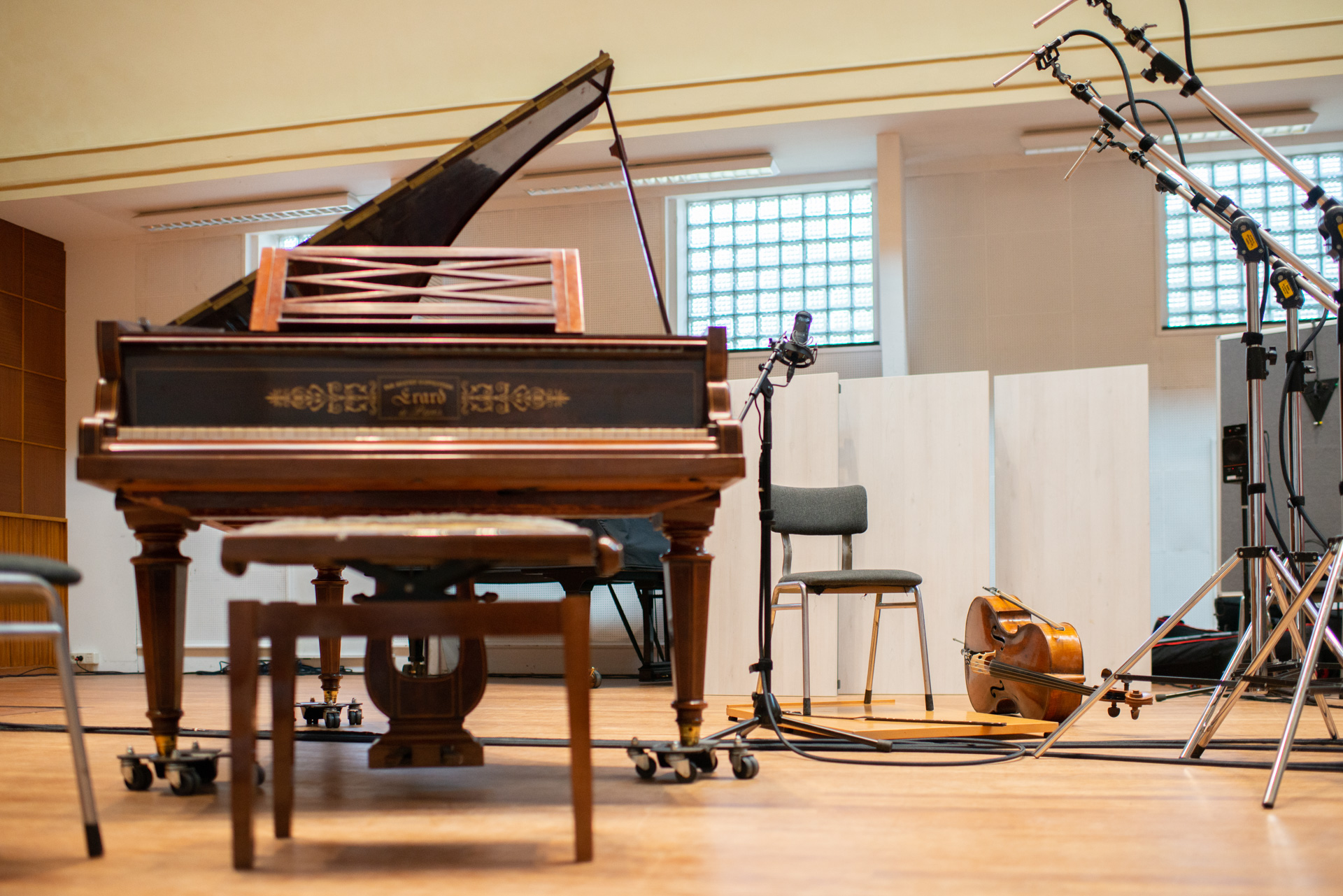 The Sonodore RCM-401 main microphones (right) and the MPM-81 spot mic for the cello (middle).

The cello was aided a little bit by a Sonodore MPM-81 solid-state large diaphragm condenser microphone, which has a similar sound to the RCM-401 but with a bit more body to it. During the final mixing stage, we actually ended up almost not using this cello microphone due to the main system picking it up perfectly, but there were some places where it helped to have it very softly in the mix.

This recording isn’t due for another year or so, so please be patient, but I guarantee you that your patience will be rewarded greatly when it’s out!