A world’s first – recording progressive rock in DXD 352.8 kHz 32 bits. We honestly never made such a complex yet fascinating recording ever. And yet, with the guys from Paper Motion, it all went by in a breeze.

For this ultimate recording in extreme resolution of the band, we were looking for a location that we could use to record everyone all at once, all in the same room, yet with the least amount of microphone crosstalk as possible. Which is why we settled on the legendary Studio 2 of the MCO in Hilversum, where legends such as Ella Fitzgerald and Oscar Peterson recorded their music too. 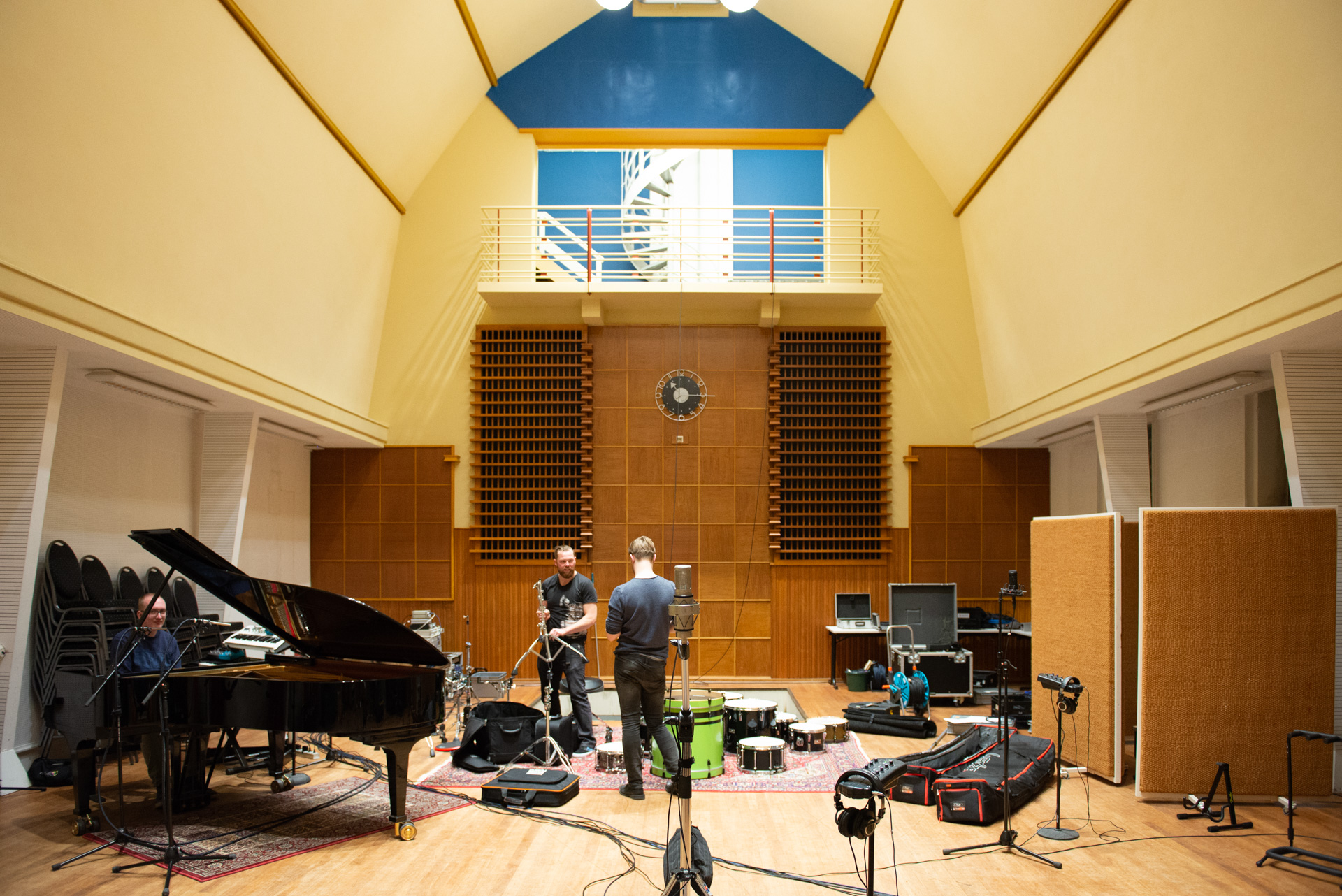 The first steps of setting up the room for recording. The entire set up took nearly a day to finish.

The room, as you can see from the image above, is actually quite roomy, but of course not too roomy. There’s still plenty of communication going on, and the reverb, although very minimal, is extremely pleasant for this kind of music.

Remember how we said we prefer minimalist recording setups? Well, here we are disproving our own theories. But let me explain.

For pop and rock music, you generally want a more close-miked sound, meaning that you usually prefer the instruments without all the acoustics around them. If you’d record this band the same way as you would with a classical ensemble, the reverb would just drown out any details the guys would put in. That, and by relying more on close-miking, you’re able to have much more control over the end result.

That said, I don’t think there were ever any DXD recordings made with such high channel counts before. Imagine 32 channels/microphones, all going to the recording machine through a singular ethernet cable. It’s incredible it’s even possible, although we did run into some issues connecting one MADI-converter into the audio-over-IP stream. 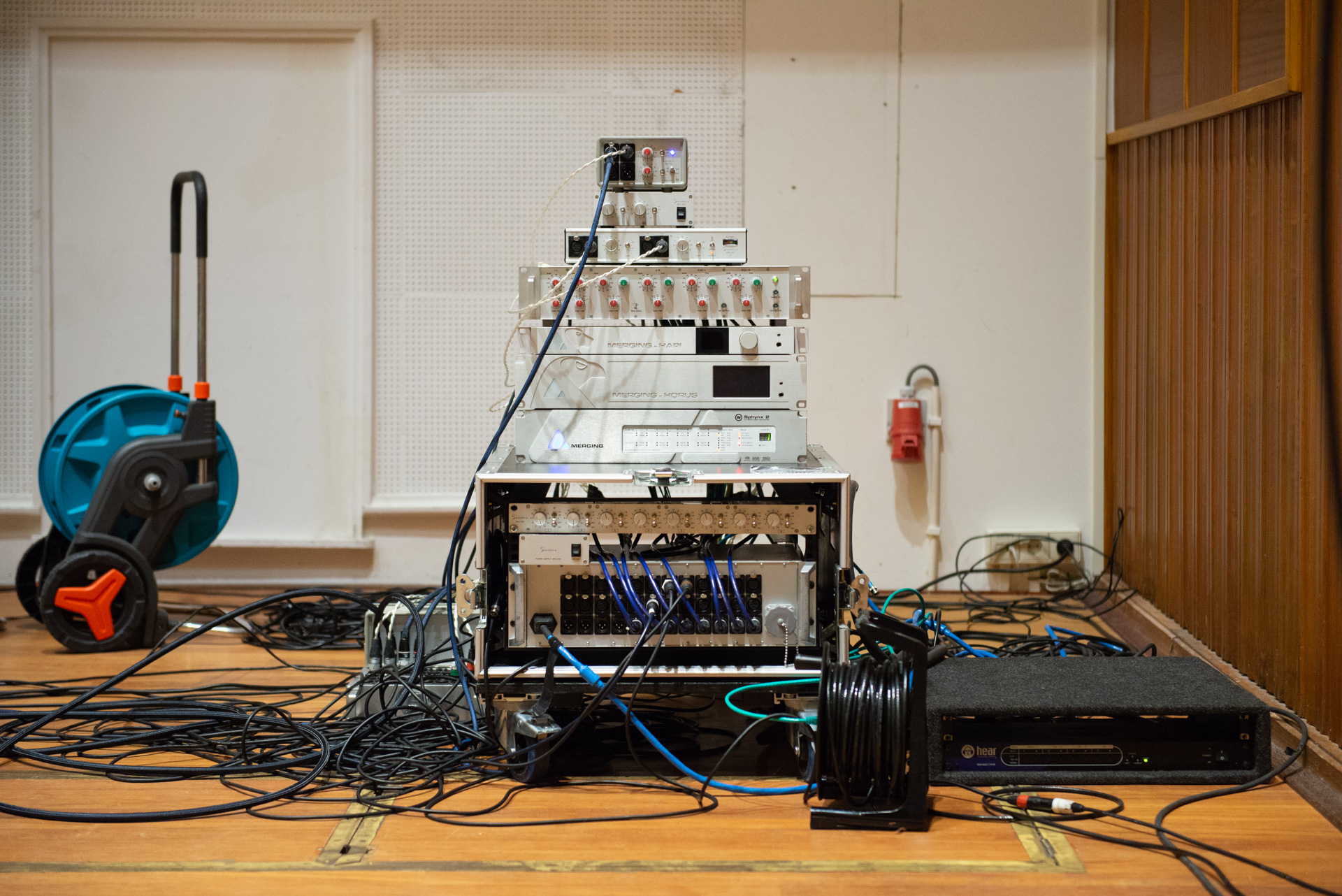 We used a variety of preamplifiers, all built by Rens Heijnis from Sonodore. This, because all of the microphones we used – save for a few – were Sonodore 60V active powered, forcing us to use their proprietary preamps. The AD-converters you see in the image above are respectively the Merging Hapi, the Horus, and the Sphynx, the latter only capable of MADI, prompting us to connect that one to the Horus to link it into the audio-over-IP-stream. 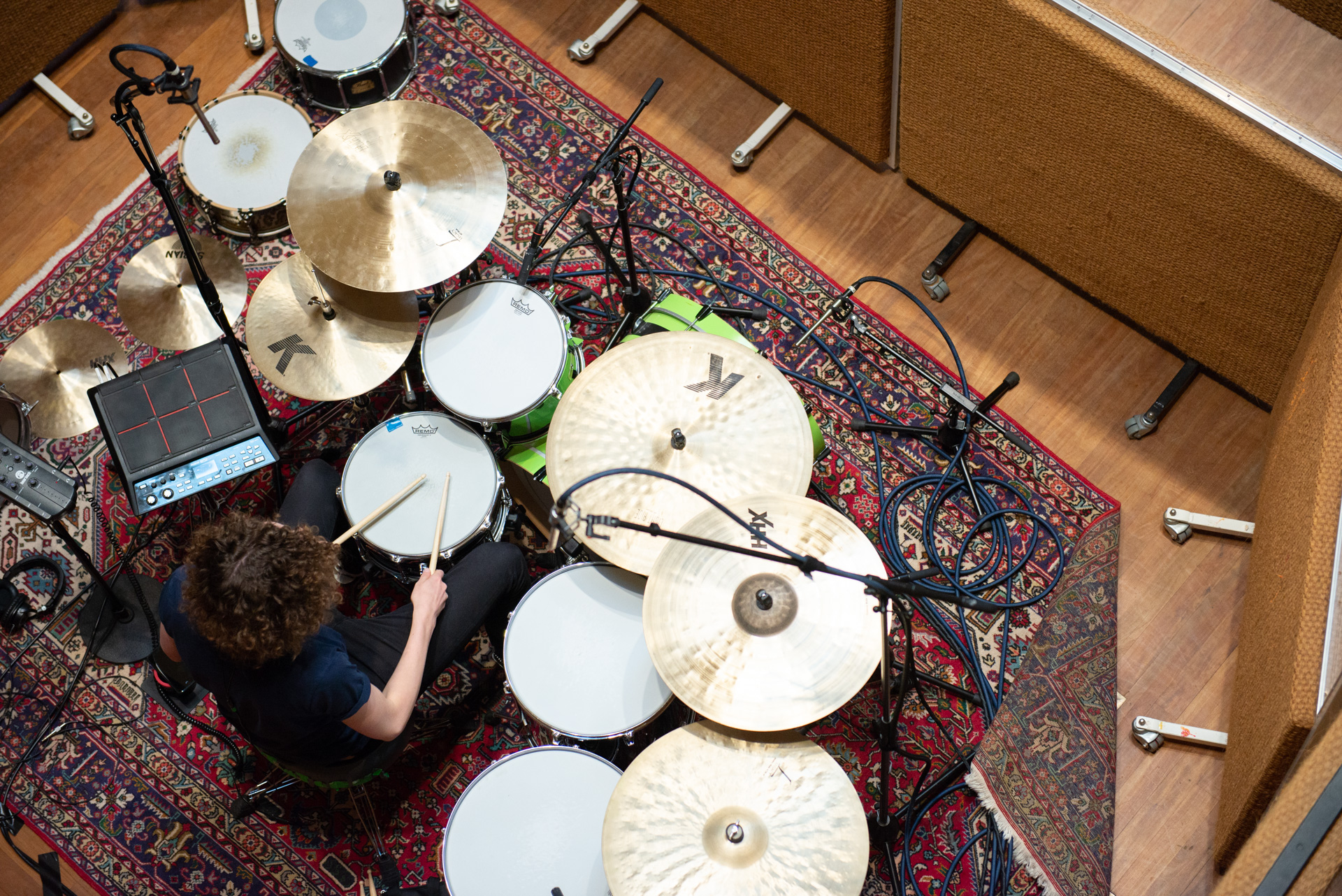 So many drum microphones already…

On the drums, we used Sonodore RCM-401 omnidirectional microphones for main overheads, aided by a combination of Heijnis-modified Neumann and Schoeps cardioids close-miking the kick, snare, and toms.

For the guitars, we used a combination of the Sonodore RCM-401 and the Brauner VM-1 tube microphone. Whenever we needed a more clean sound with lots of presence, we used the Sonodore, and whenever we wanted a more dense, thick sound, we opted for the tube mic by Brauner. 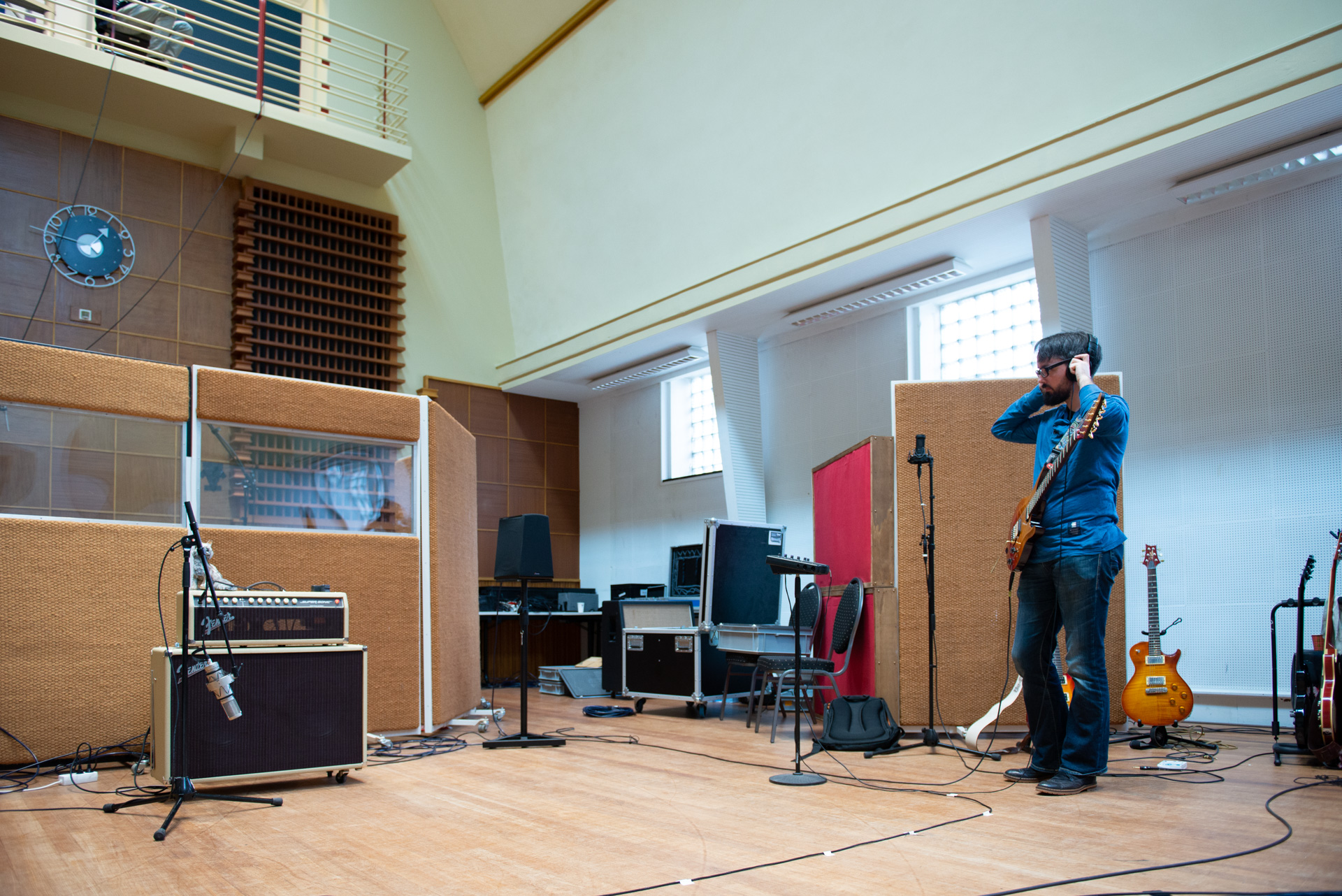 A beautiful vintage Fender amplifier, picked up by the beautiful Brauner tube microphone.

For vocals, we used another Braumer VM-1 tube mic for Geert-Jan’s lead vocals, and gave the rest of the band Sonodore MPM-81 tube mics for their backing vocals. There’s a very interesting difference between these two: the Brauner being the more vintage-sounding of the two (although still quite transparent), and the Sonodore highly analytical, although still nice and lush due to its tube circuitry. 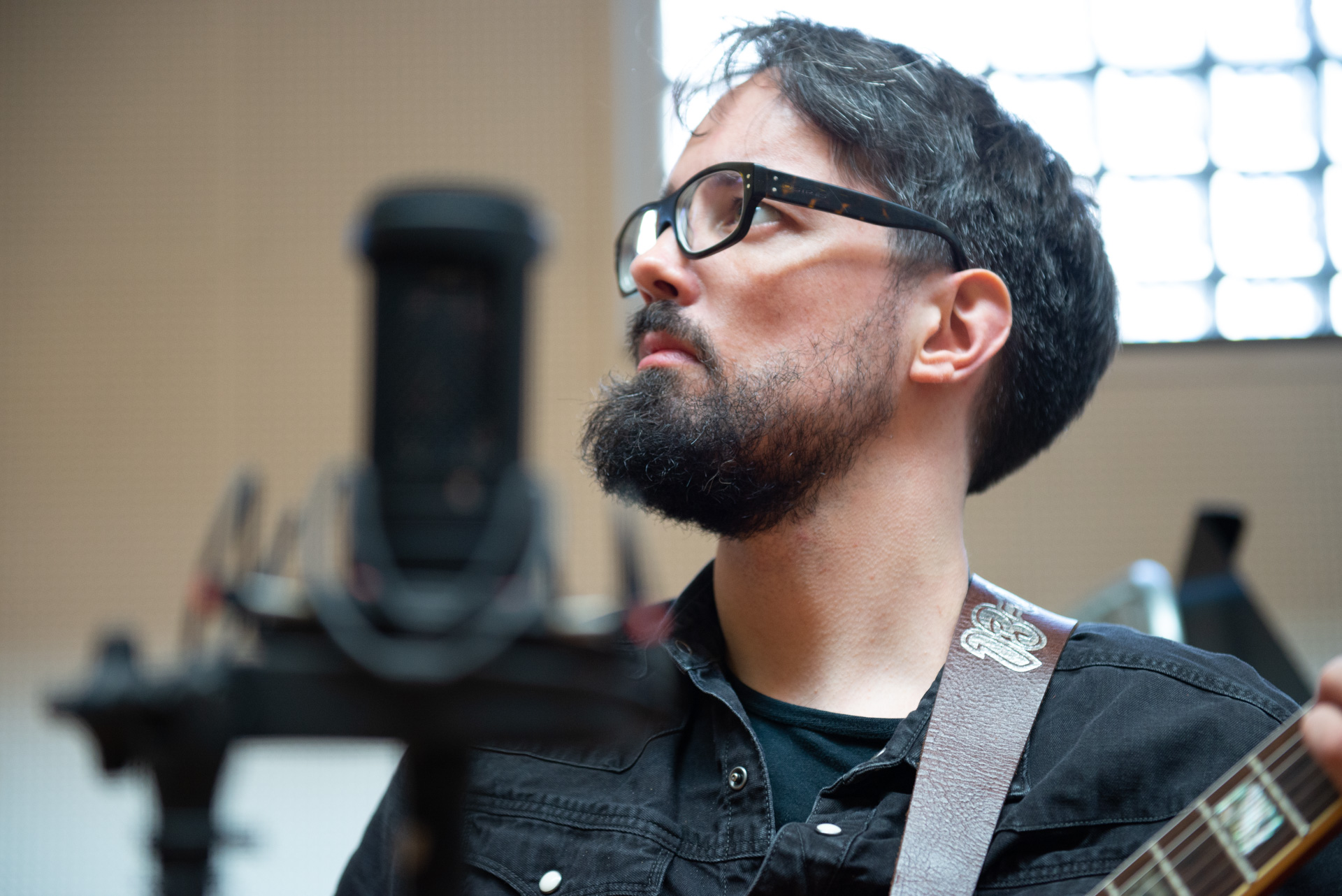 The Sonodore MPM-81 Tube Microphone in action, here on backing vocals with Gerben.

All the keys in the world

Well, maybe not all. But a lot. Bart Koop used a combination of the Steinway Model B grand piano, Roland RD-700GX synthesizer, and the Waldorf Blofeld synthesizer, the latter two connected to a variety of guitar pedals for extra effects. 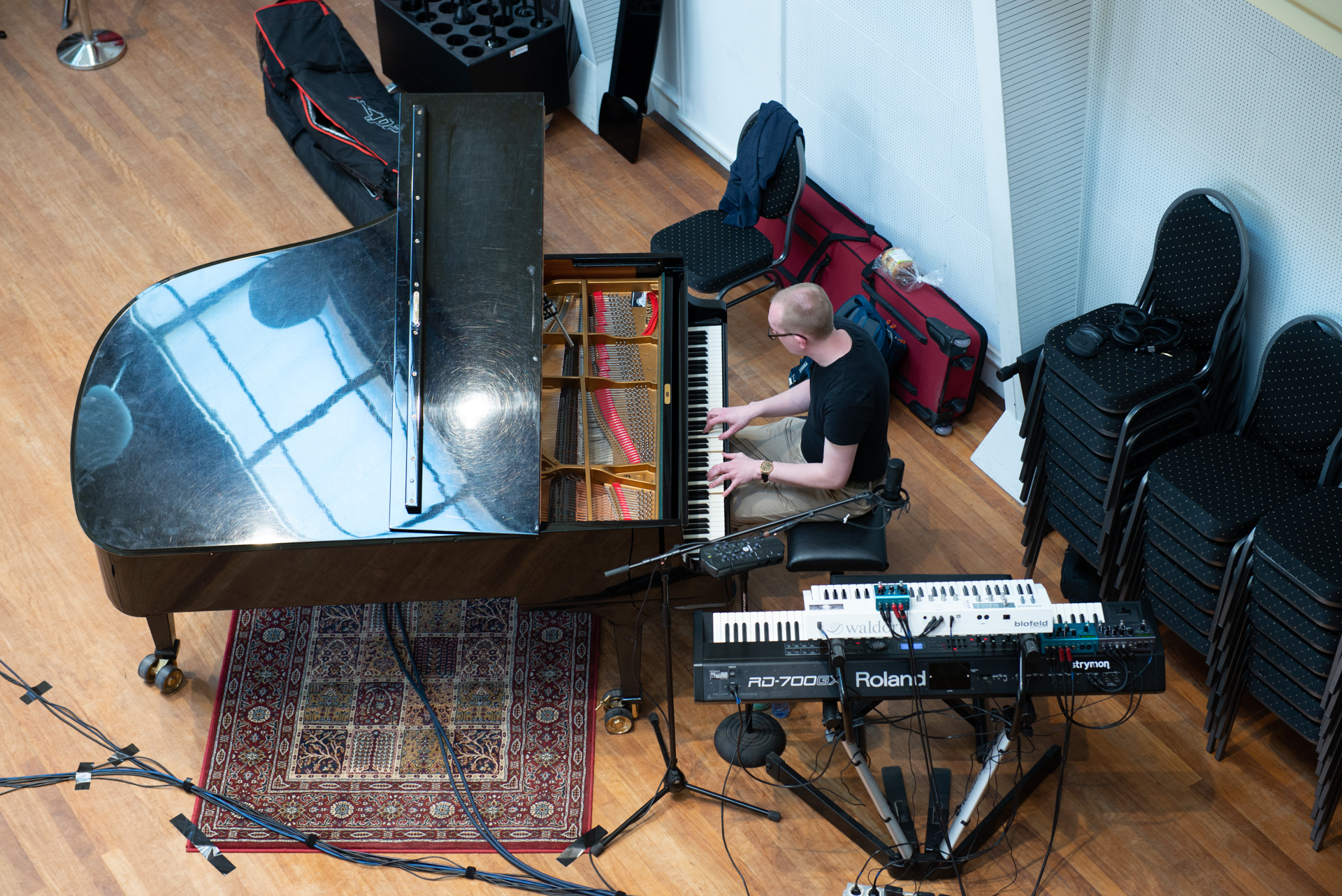 When we made the reservation for the studio, we had the chance to also rent this tiny little broom closet right above it, that we could use as a control room. So said the rep from the building. But, with a low 2-meter ceiling and a perfectly square footprint, we were in for a mess of trouble.

But there came Ben van Leliveld from Acoustic Matters (now also TRPTK) to save the day. With his acoustics tools and equipment, he profiled the ‘broom closet’ and placed a sparse amount of RTFS acoustics materials on the wall. I never though I’d say it, but he turned that tiny broom closet into a studio with better acoustics than a lot of mixing rooms I’ve been in. 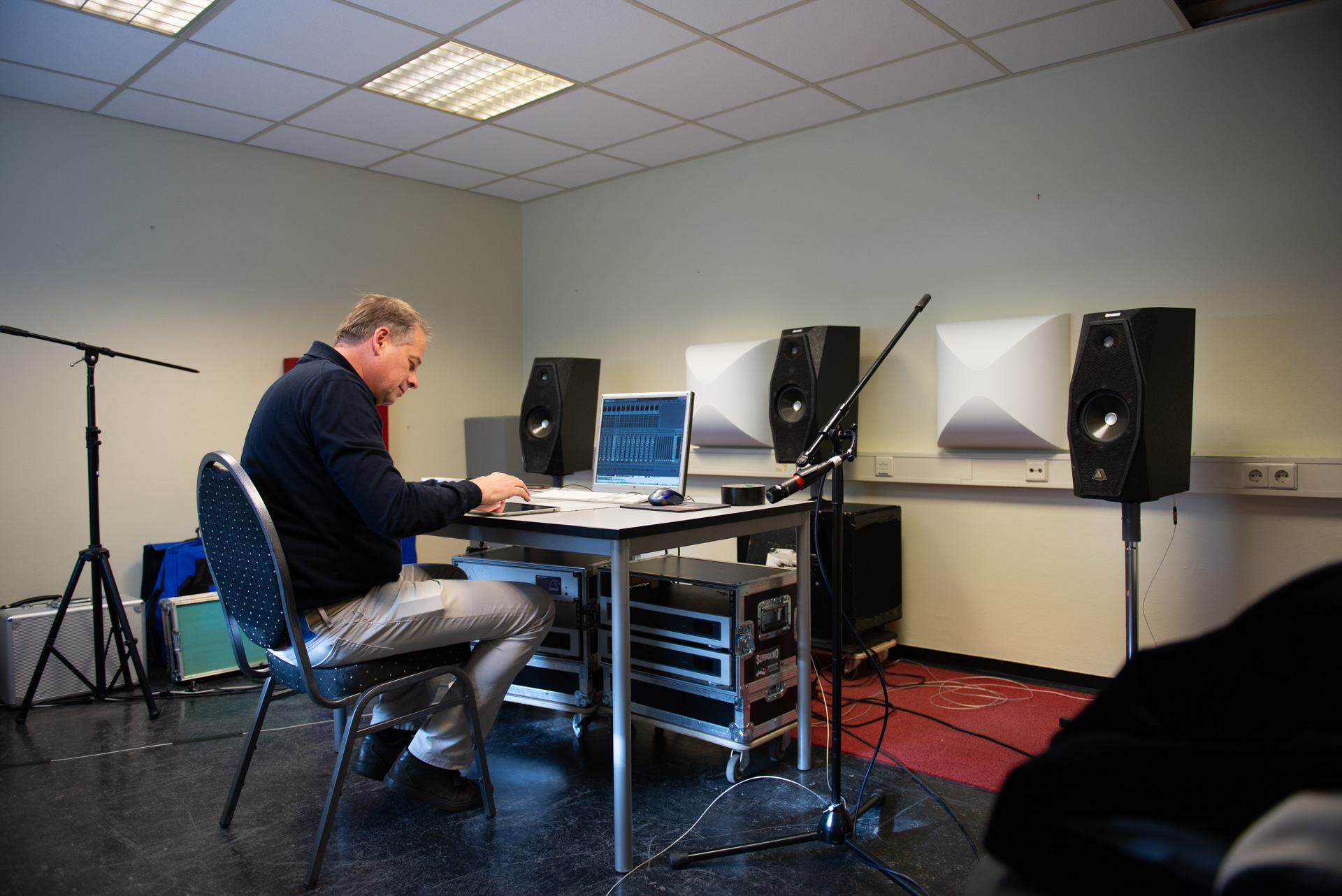 Ben setting up and tuning the room with the RTFS Sirrah diffusors in between the Avalon Mixing Monitor loudspeakers. Within a couple of hours, we had an almost mastering-grade monitoring setup in the broom-closet from hell.

All in all, we had a blast recording the band for almost a week, but what seemed like just a few hours. We can’t wait to share this recording with you! 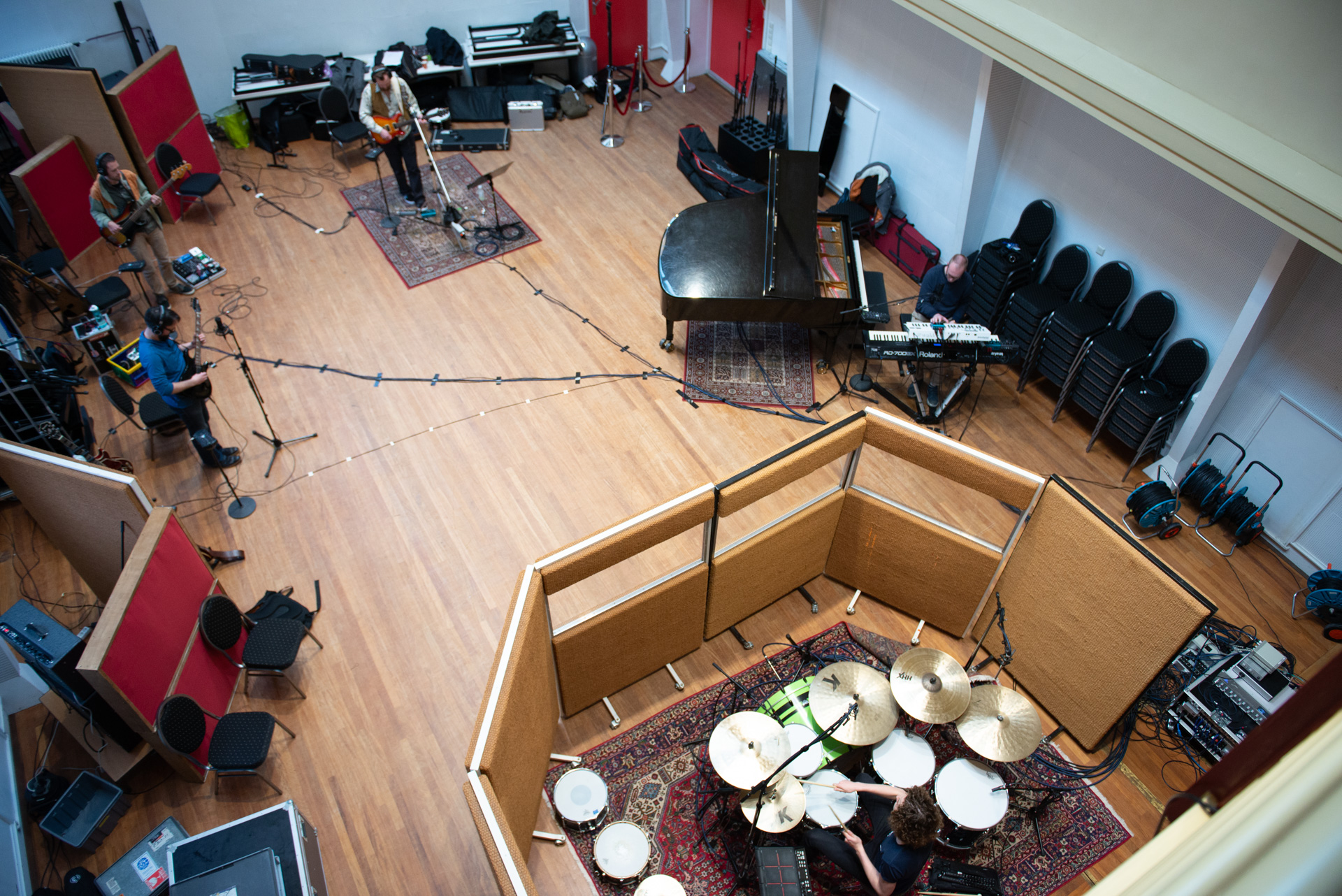 A view from the balcony of our broom closet turned studio.