What a fantastic project this has been! Violinist Merel Vercammen set out to record fully free improvisations with eight other classical and jazz artists. After listening to all of the improvisations that came from this, all sorts of animals came to her mind, hence calling the album The Zoo. Each improvisation got titled after an animal, so you’d have tracks like Capybara, or Mountain Gorilla for example. 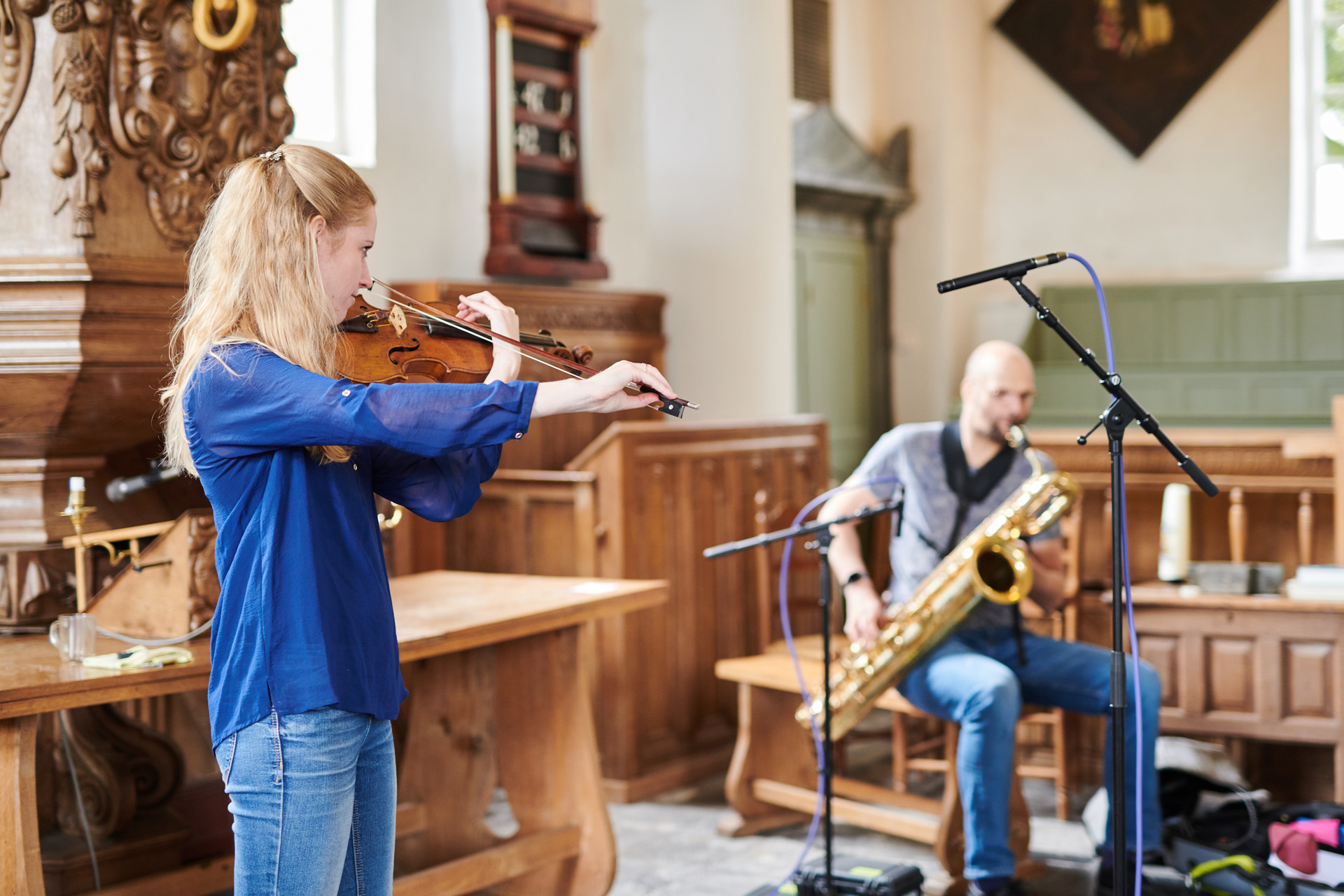 Merel Vercammen in a duo improvisation with Ties Mellema on baritone saxophone.

The recording was split up over two locations: one was the Oude Sint-Victorkerk in Batenburg, the other was the famous Orgelpark in Amsterdam. The first sessions took place at the church in Batenburg, so let’s zoom in on that one first, shall we?

The first five sessions were distributed over three days at the Oude Sint-Victorkerk in Batenburg. We started off with a general sound check with just Merel, before Maya Fridman came in. (Remember her? Yeah, we do a lot of albums with her. That’s also because she’s part of the team, of course.)

Merel (left) and Maya (right), getting ready for another live improvisation. As you might notice, in each of the pictures, Merel is standing exactly on the same spot relative to both the main microphones and her spot mic.

Because here’s the thing: we took on the job of making an album with eight completely different duos (well, half of the duos are different each time..) that still had to sound, well, together. Even though you have these eight completely different instruments sitting next to Merel, you still had to make it playable, keeping Merel in the same place in the sound stage, keeping her sound very consistent across the board, and then fitting the other instruments around it. This took lots and lots of preparations, calculation and simulation. This also meant that we had to mix everything in a way that the violin stays exactly in the same place with the same sound, not changed by the channel bleed of another microphone (this gets really tricky really fast!)

After Maya, we recorded duos between Merel and soprano Bernadeta Astari. The great thing about using voice and cello is that they have a lot of similar qualities in terms of sound. This means that you can usually use the same kind of microphone to support both cello and voice. Which is exactly what we did – the DPA 4015A did a great job as a spot mic for both Maya and Bernadeta. 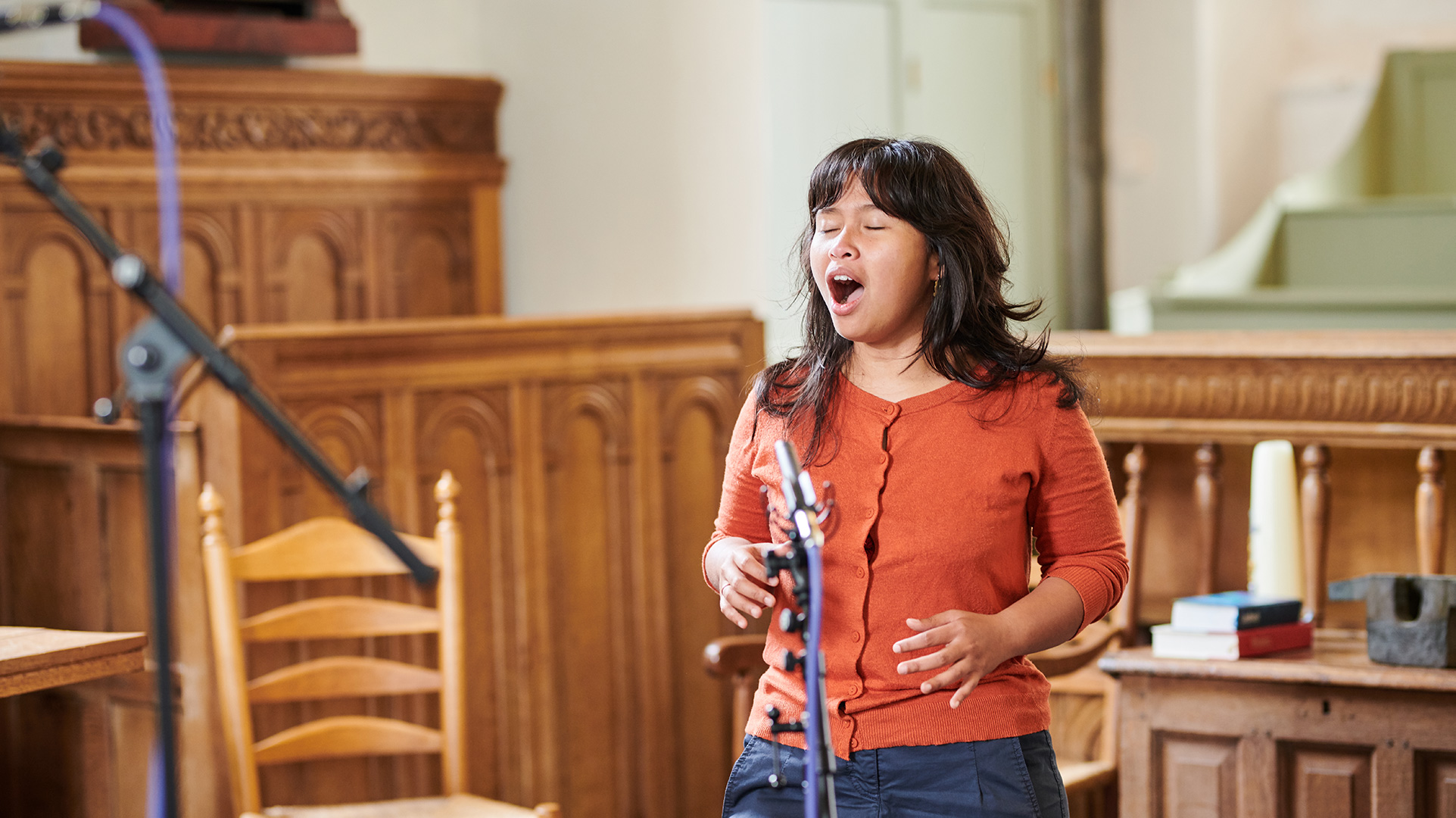 Soprano Bernadeta Astari with the DPA 4015A subcardioid microphone in the foreground.

The next day, we recorded duos with Merel and Vincent Houdijk, who plays vibraphone and singing bowls. This took a bit more time to get perfectly well and coherent with the previous recordings, as the “instrument” (a vibraphone and a table full of singing bowls) was much larger in footprint than Bernadeta and Maya’s cello. Fortunately, the church’s acoustics were quite forgiving; not much detail was lost in the mix when instruments were a little bit further to the back of the hall. 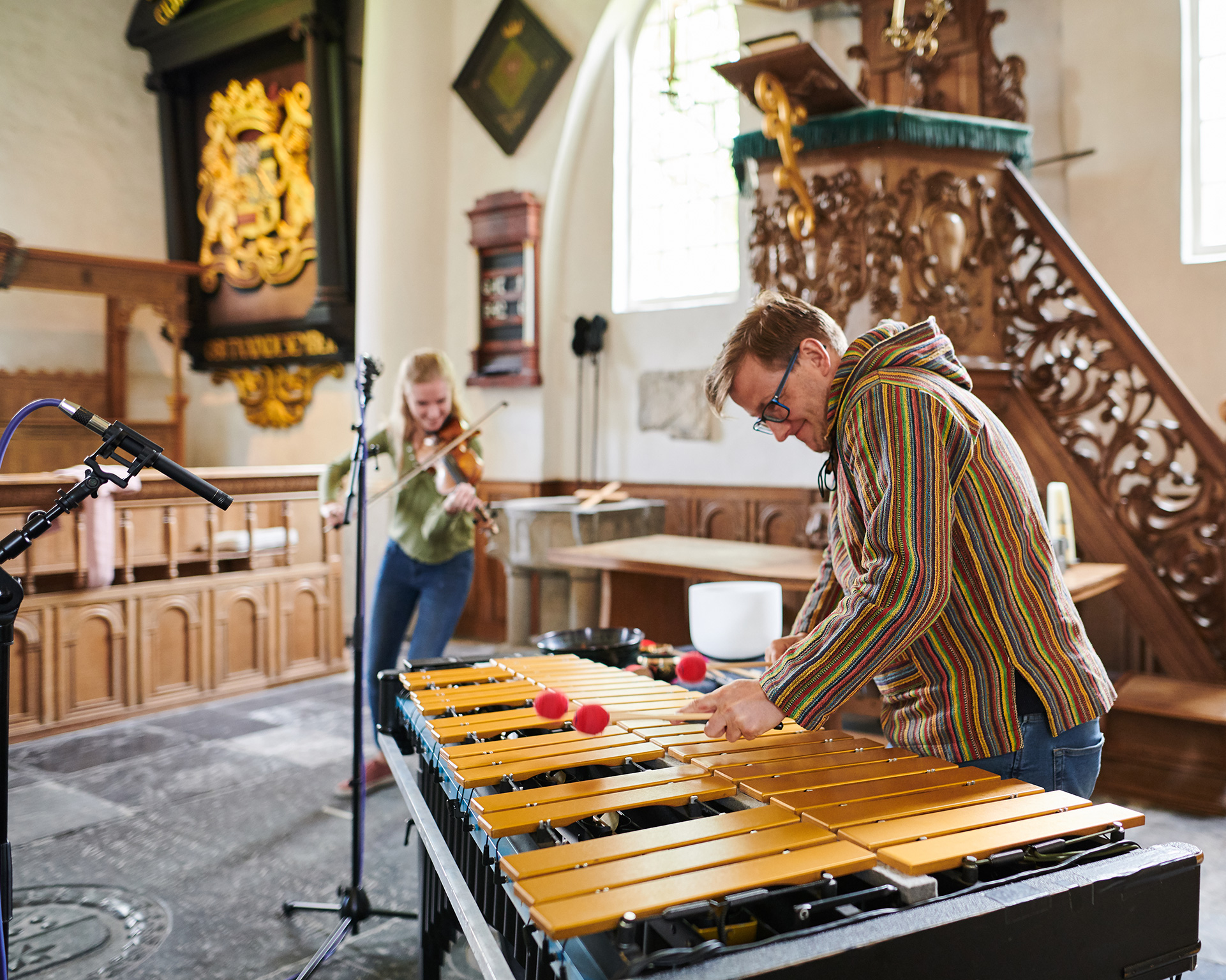 Vibraphonist Vincent Houdijk. In the background, you can see some of his singing bowls that were used on the track Halcyon.

We also did some experiments with Vincent walking around in the church with his singing bowls, giving the surround mix an extra layer of fun (you hear not just the singing bowls all around you, but also his footsteps).

Next up, the following day, was Ties Mellema and his baritone saxophone. Ties, a born improviser, came up with the greatest melodies and sounds, and the session got us to so many great results we were almost not able to choose what to put on the album. 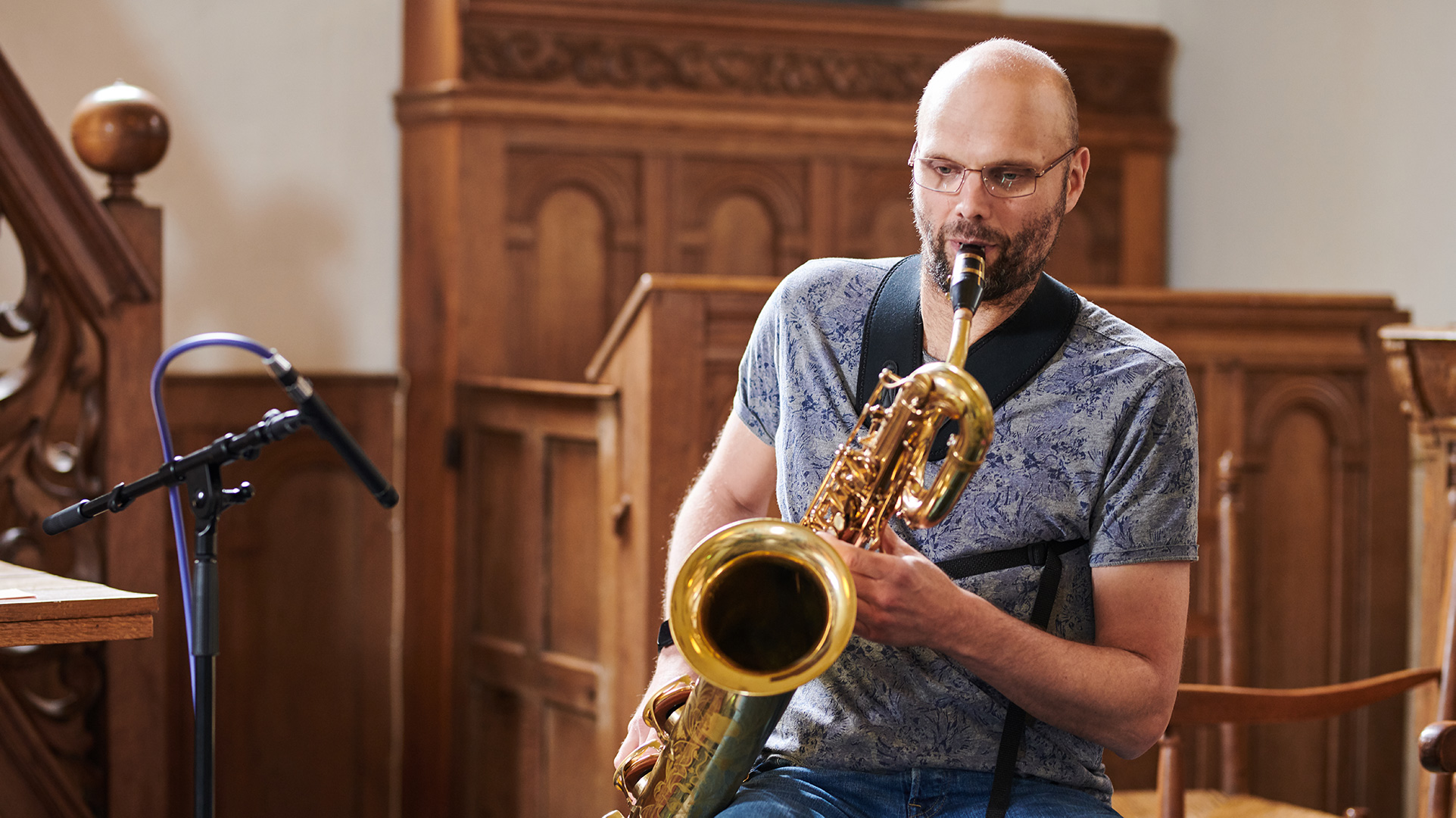 Ties Mellema playing the baritone sax. Again, supported by the wonderful DPA 4015A subcardioid microphone, like all other instruments so far.

Finding the right place to mic a saxophone – for me at least – has always been a task. You want this perfect balance between this aggressive, sometimes raspy top end and these beautifully warm lows. Saxophones are incredibly dynamic instruments, with so many possibilities in sound, it’s insane. We settled on spot-miking him a bit more from the side, as this gave us this equilibrium we were looking for. Again, like the other duos, we needed to keep the violin very consistent in one place, and fill the other side with Merel’s “opponent”.

With this session done, it was time for the last instrument we would record in the old St.-Victor’s Church, accordionist Wilco Oomkes. We ended up having Wilco around the same place we started for Maya, pretty much at an equal distance from the main microphones as Merel was, supported by – you guessed it – the DPA 4015A subcardioid microphone. 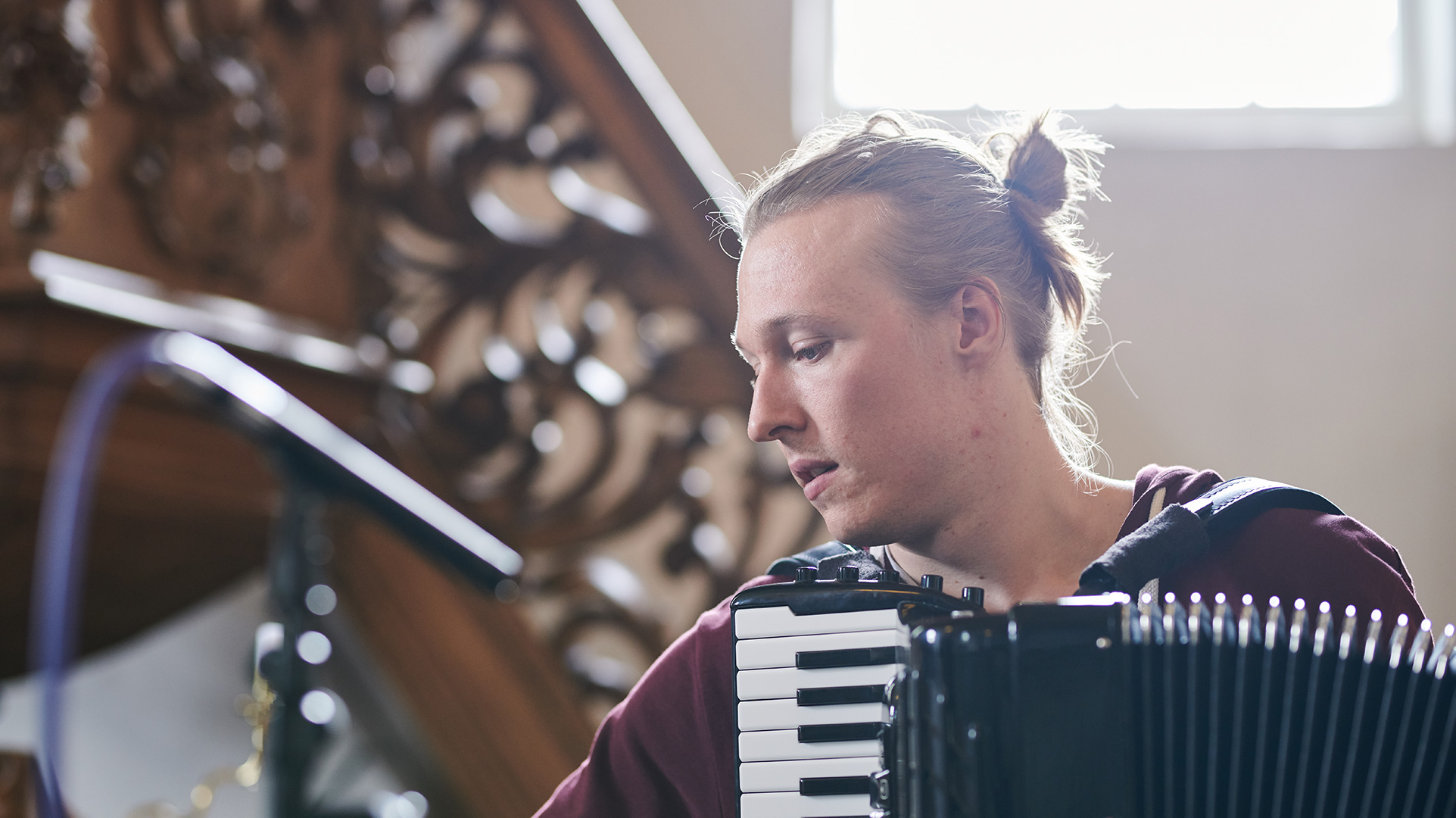 On the accordion, Wilco Oomkes.

For all of the sessions, we were able to keep the main microphone system, consisting of five DPA 4006A omnidirectional microphones, perfectly in the same place. We had taken our trusty laser distance meter to be able to position it right to one tenth of a millimeter, making sure we have a consistent sound each and every session.

Right before we started recording the first session of The Zoo, we had gotten in our newest Furutech Custom Microphone Cables to hook up our DPA mics to our Merging AD/DA converters’ preamplifiers. We were downright astounded by the sound they transfer – they simply become “invisible” to the sound, completely transparently carrying the microphone signal to the preamplifiers. Many thanks to the wonderful people at Furutech providing us with these cables! 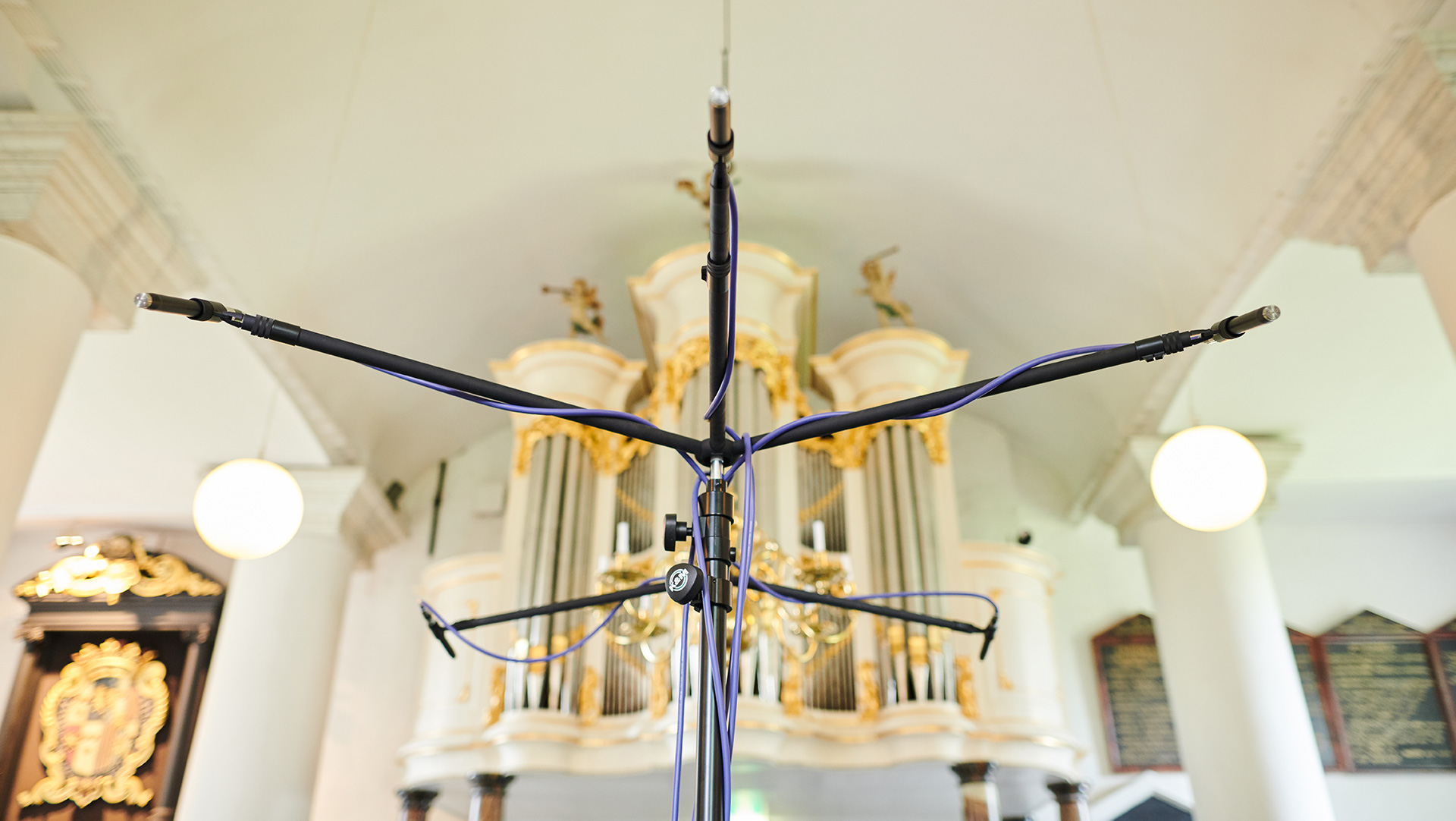 The main microphone system our OOA (Optimised Omnidirectional Array) of five DPA d:dicate 4006A microphones. All connected to our preamplifiers with Furutech Custom Microphone Cables.

Off to the Orgelpark it is! The place has a great background story – it’s owned by an organ collector from Amsterdam, and there’s around eight organs at each given time there. From the center console in the middle of the venue, you can control four of the opposing organs on each wall. This made for some great surround sound!

But before we delve into the organs of the venue, we first recorded Merel in a duo with pianist Tobias Borsboom on the beautiful German Sauter piano. I never heard of the make until then, and was surprised to hear a sound I’ve never heard in a piano. Very clear, crisp, and from what I could hear, very difficult to play on as well. But once you get the hang of it, you can pull some stunning tones out of it! 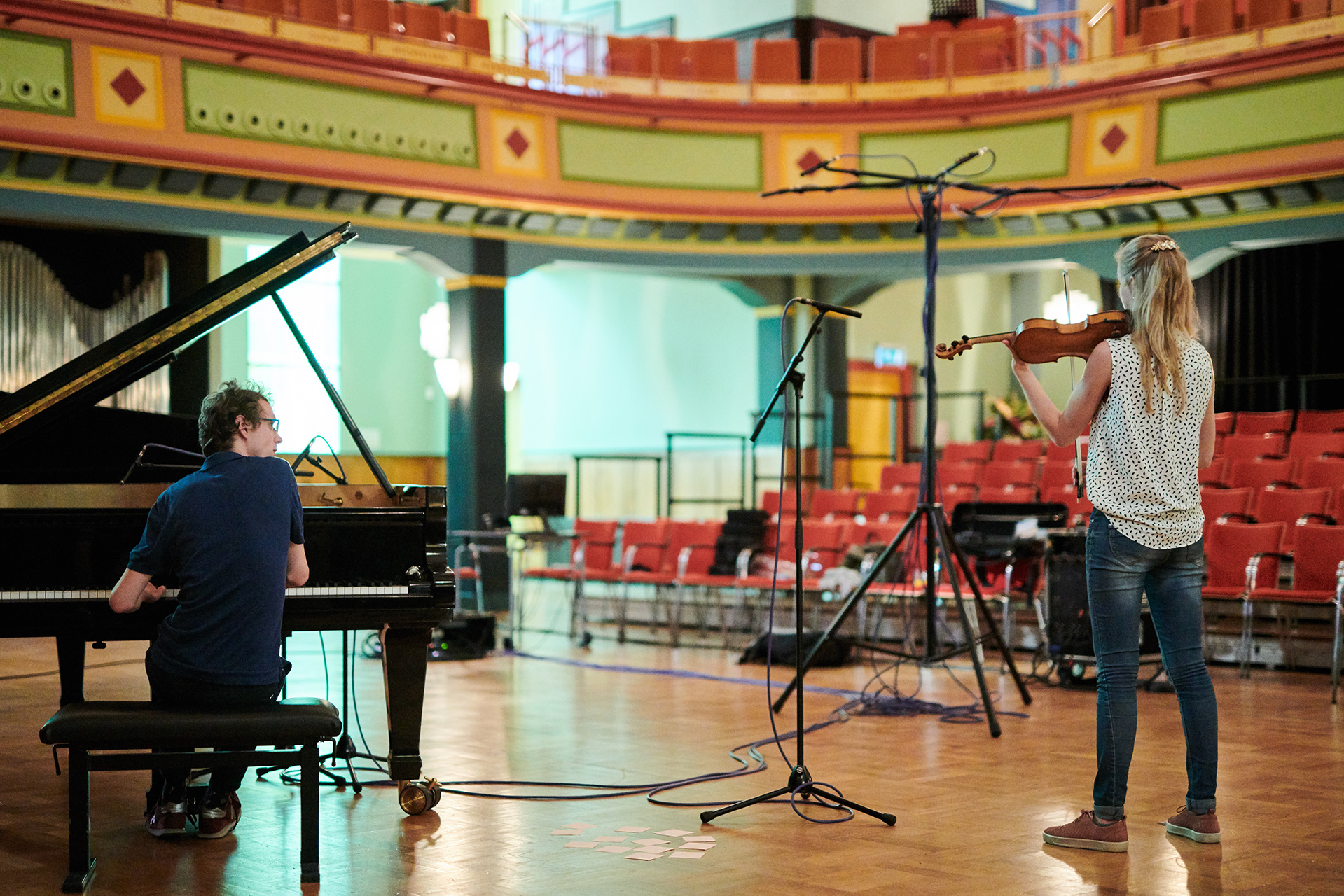 Tobias Borsboom (left) and Merel Vercammen (right). You can see here that Merel’s standing in exactly the same place relative to the main mics as when we were at the church in Batenburg.

We decided to close-mic the piano with two microphones instead of one. This has simply to do with the fact that using just one spot microphone on a piano often results in a somewhat pushy sounding piano tone. Another thing we had to keep in mind was that, to keep the violin sound very concrete across the album, we had to move the piano back a fair bit, farther than we would normally do. To compensate for that, we mixed in these close-mics a bit louder than normally. This, however resulted in a very nice, crisp, detailed sound that I actually ended up really loving.

That very evening, another pianist came to the Orgelpark to duel with Merel, and that pianist was Rembrandt Frerichs, the only jazz musician from Merel’s bunch of eight duo partners.

Rembrandt didn’t just play on the same piano as Tobias did, though. To create eight very different combinations, and because Rembrandt is known as an expert on earlier keyboards, he chose to play on the Orgelpark’s historical Érard concert grand piano. If you’re interested to learn more about Érard pianos, be sure to check out the recording blog of Le Prophète.

After this, the time had come. The time to record the biggest instrument of all, the almighty Sauer organ of the Orgelpark. Merel’s partner in crime here, was Jaap Zwart, someone who’s well-versed in the language of improvisation.

After getting the organ controller all ready and set up – trust me, this took a long while, with all the technology on board and what not – we did a quick sound check, and, well…

So, yeah. Our microphones were way too low to pick up anything nice from the organ. We needed at least, say, a meter or so of more height to record this. There goes our plan of keeping everything consistent, right?

Well, no! We decided there to use a platform for Merel. Two big pieces of stage bound together, on huge 1.25 meter feet. This way we didn’t need to change anything in the sound, we just took things to a whole new level(sorry guys, I’ll let the bad puns stop, it’s getting late). We put Merel’s spot microphone 1.25 meter higher as well, and did the same for the main microphone system. Now, we could finally record the big church organ in the Orgelpark, all the while still keeping Merel’s violin sound perfectly consistent! Score!

I’ll let the picture tell its own story now… 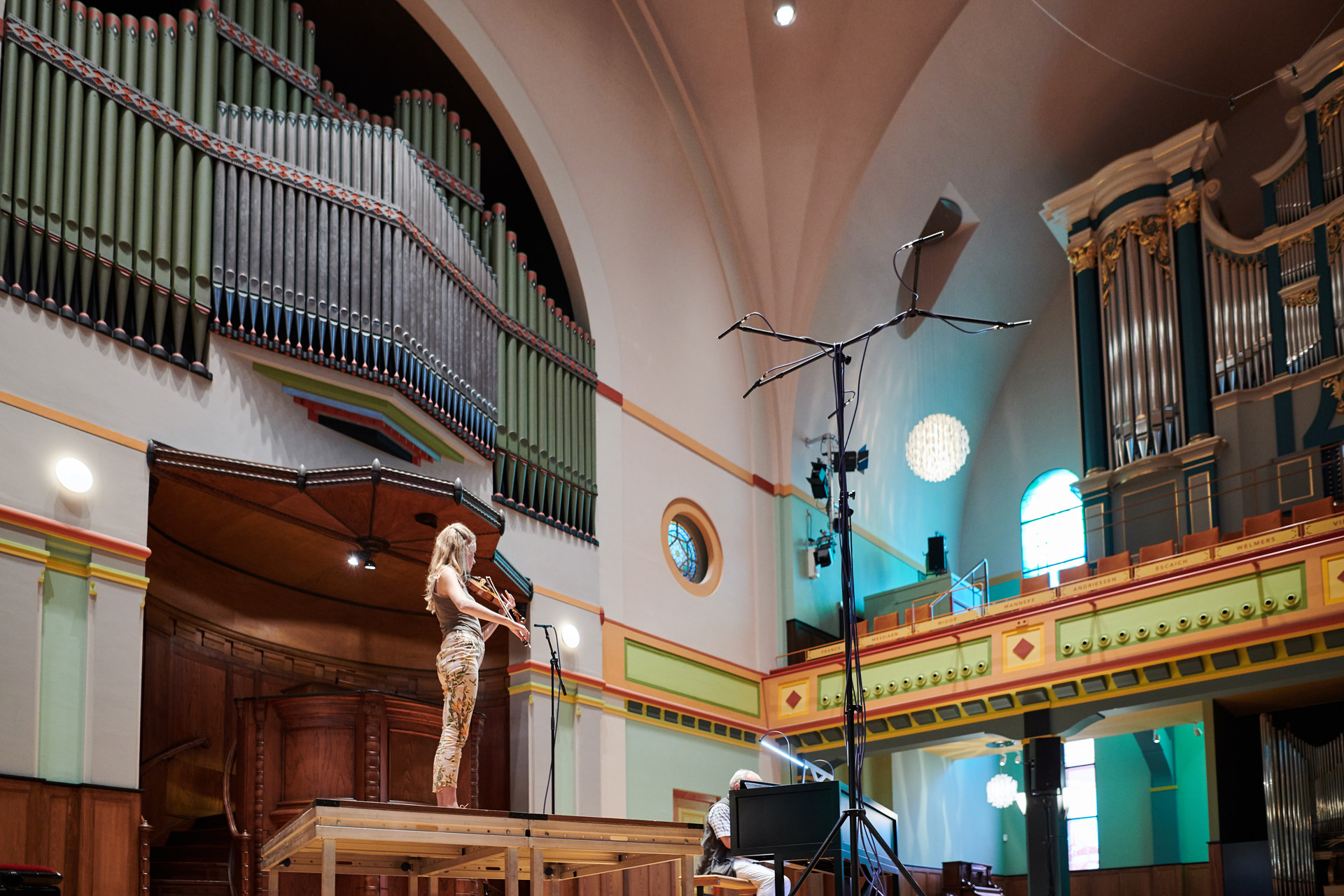 The magnificent Sauer organ at the Orgelpark, with Merel on an elevated stage (1.25m), and Jaap Zwart behind the console of the organs. You can also see the main microphone system we used for this, which used the exact same dimensions (down to 0.1mm) as back in Batenburg.

Well, that’s it for now! It’s back to the studio, mixing all these tracks together, making up great names for them, and putting them on a CD (well, as I’ll later find out, two CDs).