Only a few times in your life, you’re faced with the chance of a lifetime. For me, as a recording producer as well as an early-music-lover, my chance of a lifetime was when I was asked by Ralph Rousseau to record Telemann’s recently-discovered 12 Fantasias for Viola da Gamba, that had been thought lost for over two and a half centuries now. It’s no secret the viola da gamba is one of my all-time favourite instruments, and you might know that Telemann is one of my favourite composers. So what do you do when a chance like that comes knocking at your door? You’re right. You go all out.

Finding the perfect location to record such masterpieces with an artist like Ralph is no easy feat. You want something that’s as historical as the music and the instrument itself, yet you don’t want to cut corners on the acoustics and the overall sound quality in your album. Eventually, after a long and hard search, we got the opportunity to record in our hometown of Utrecht, not too far from my house and the studio actually.

The recording venue we found was the historical and mighty 13th-century Geertekerk right in the center of the old part of the city of Utrecht. It has an interesting story, actually – the church was originally built outside of the city walls, but after a few hundred years, the people from Utrecht moved the entire church to within the walls, to the location where’s it at to this date. And what a beautiful church it is. Not just talking about the acoustics (which I’ll get right too in just a bit, be patient) but just walking into the building you get this sense of history, just thinking about the centuries that have passed, the stories these walls have contained. 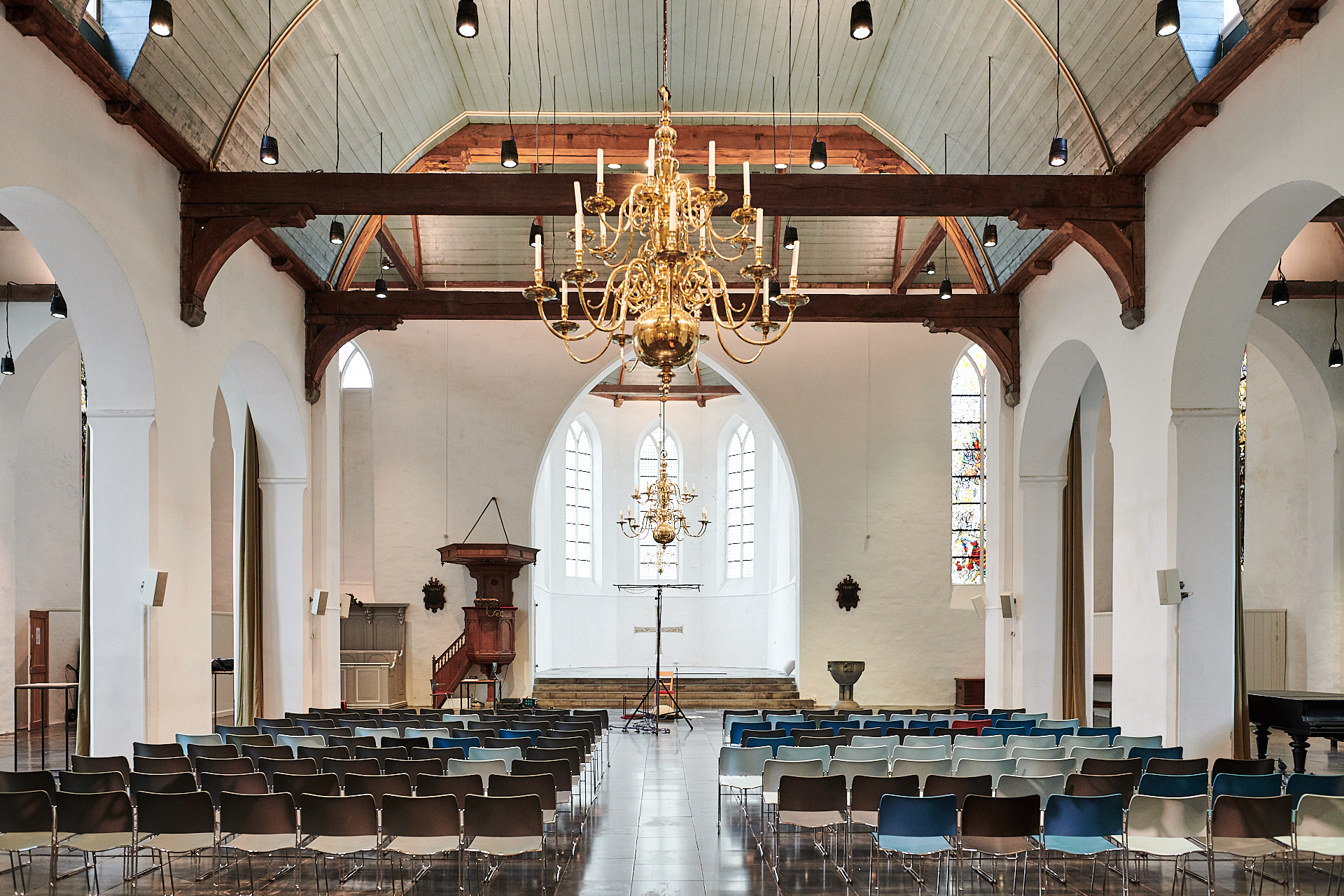 An inside view of the Geertekerk. In the middle, you’ll see the “tree” of the tripod with the five main microphones attached.

Now, the church has gone through a number of changes since, say, the 13th century. Of course it did. Only fairly recently, a company called Heirloom has actually restored lots of the building, making it suitable for concerts, recordings, weddings, business events, and much more. With their digitally-controlled, colourful lighting system one can change the look entirely; from church to modernistic business event venue. In our case though, it was just a church.

Getting the perfect power

If you’ve been around in the field of high-end audio, you might know that bad power kills good music. And the same goes for recording. Luckily, the proprietor of the building knew of a special power connection that was completely separate from all the LED lights and everything else in the entire church. So we hooked up our Furutech Daytona power filter to that, making sure the clean power was cleaned up even further, and started setting up the rest.

Another great little tool we use for all our recordings is the Computer Audio Design (CAD) Ground Control GC1. We connected this one to the ground output of the Daytona to filter out any unwanted nastiness on the power, and then used its bigger brother, the GC3 on every other component (the Merging AD/DA converter, the PC, and even the LCD monitor!) to make sure everything was powered correctly and absolutely silently. This is how far we’ll go to get perfect sound, ladies and gentlemen.

The DPA d:dicate microphones we’ve been using since this summer have been an absolute godsend. Their sound is insanely natural and transparent, more than any other microphone I’ve ever used. And the funny thing is, musicians pick it up totally unconsciously – we’ve had musicians sitting at the studio, saying “What did you change since this summer? It sounds so much more natural.” I think this really speaks for the power of these microphones. Their heritage lie with another Danish company called Bruel&Kjaer, who now only make the capsules you’ll find in these microphones.

So what microphones exactly did we use? Well, we started with a main mic array – our own Optimised Omnidirectional Array (OOA) consisting of five DPA 4006A omni mics. These mics are connected straight to the left, right, center, rear-left and rear-right channels of the final mix, meaning that in both the stereo and surround mix, you’ll get an exact microphone feed, completely unmixed and unaltered. 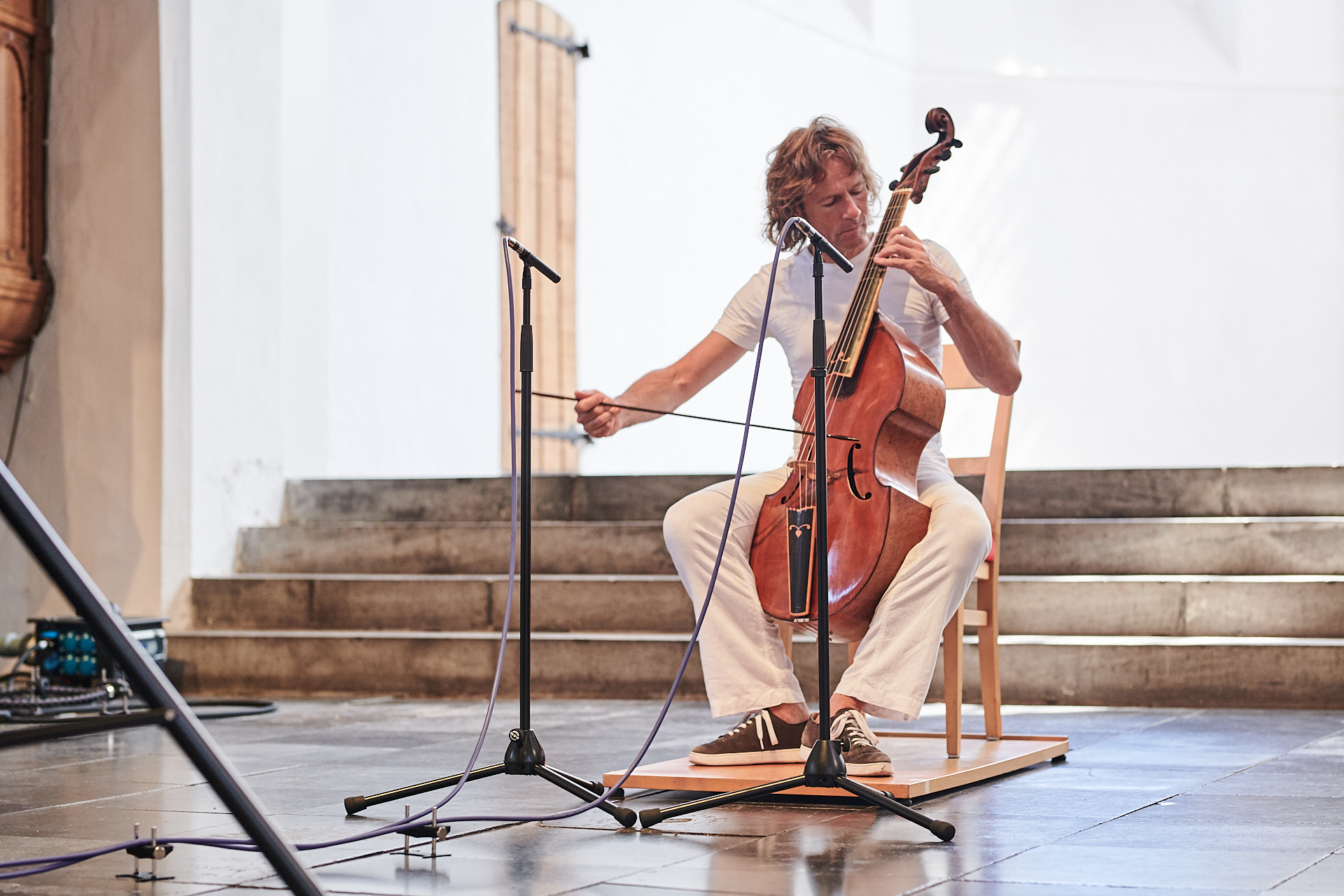 In this image, you can see the DPA d:dicate 4015A subcardioid mics working as support microphones to get just that little bit of extra detail out of the instrument into the mix.

We did, however, use just a hint of close-mics as well. For this, we used the DPA 4015A subcardioid microphones. These microphones have a pickup pattern exactly halfway between an omni and a cardioid microphone, and their sound is somewhat halfway between these as well. They have the openness and natural transparency that a lot of omnis have, yet with just enough focus to spot the instrument a bit better. They also blend perfectly well with the 4006A omnis!

Monitoring on location. This is always a huge issue. In most places, you can’t really set up a good loudspeaker system unless you take an entire van’s worth of acoustics equipment with you. You therefore have to work with headphones most of the times. 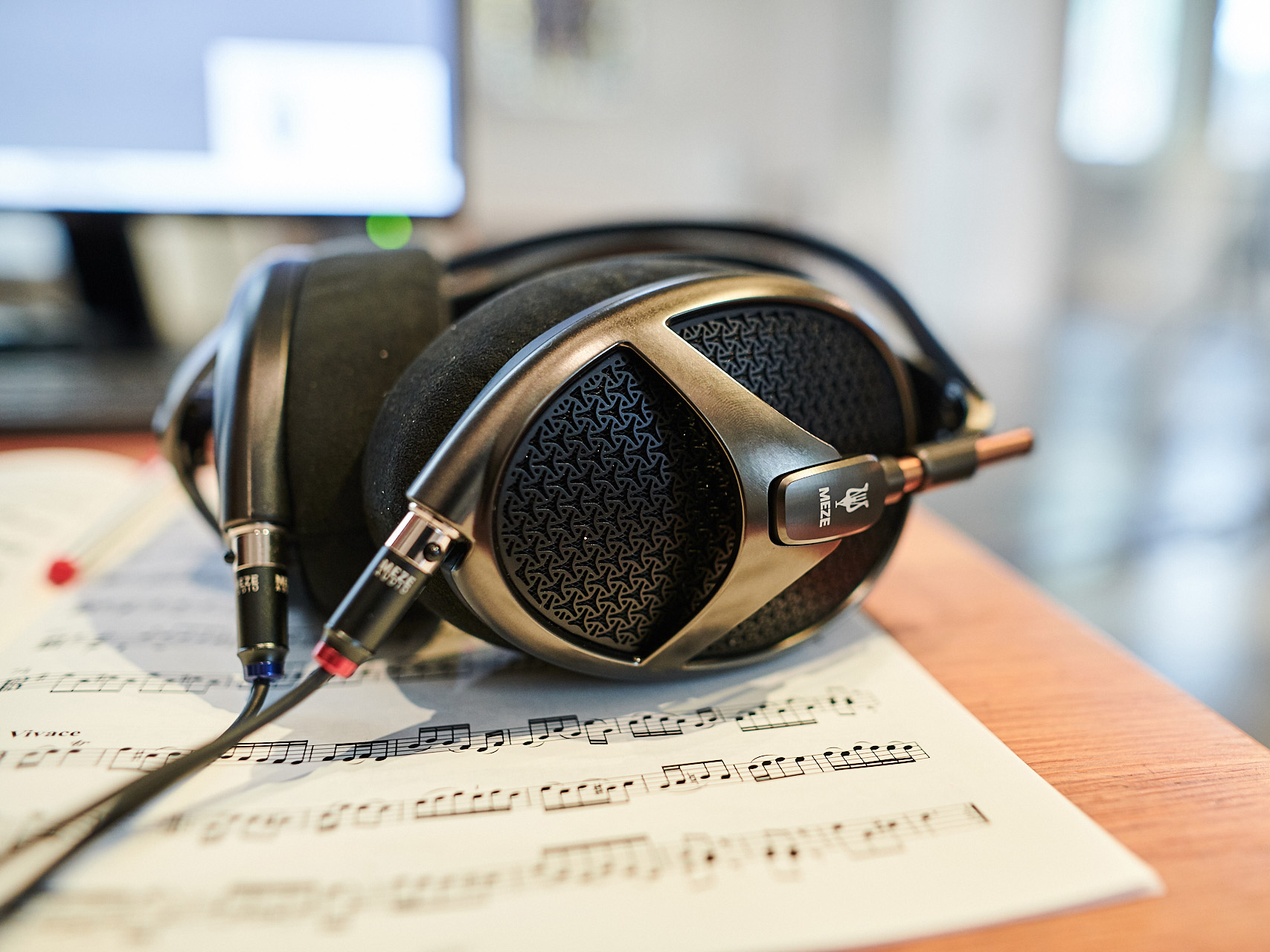 The Meze Empyrean headphones on top of the scores I used to take notes on.

Lucky us, though, got in touch with the guys from Dune Blue, the distributors of Meze Headphones in the Benelux, who asked us if we’d be interested in trying out Meze’s new flagship model, the Empyrean. And so we did. And my god, were these amazing. No, I’m not in any way affiliated with Meze nor was I paid to say this, I am just absolutely dumbfounded as to how good headphones can sound.

Now, these headphones don’t come cheap, mind you. At € 3.000,- these headphones are among the most expensive ones you’ll find in even the most high-end audio boutiques, but for a recording professional like I am, would be completely worth it. You’re able to not just hear every little detail in the mix – contrary to what a lot of high-end audio manufacturers say can be done on most really good headphones – but they just give you the sense of listening to a set of amazing loudspeakers in a perfect listening room. I don’t know what it is, and I’m afraid to ask as I’m not yet in a position to go out and buy € 3k headphones for my entire team, but I can only say: if you’re ever in a store that sells these, just audition them. Put on your favourite track, and just sit back and enjoy. They’re that good.

Now, I’ve been on the internet long enough to know that the next couple of paragraphs are going to get me messages saying “get that snake oil out of my face!” or worse – I kid you not, I’ve even had a death threat from a comment I made on Reddit about the advantages of high-end cabling for ultra-high-end audio setups.

Let me preface all I’m going to say by telling you about my background for a bit. I have a Master’s Degree in audio engineering. My study was all about empirically finding the perfect recording technique, and all throughout my studies as well as my professional career, I’ve always been opposed to snake oil products (and by golly, there are many of those around!). I’m also very, very well aware of how easily your ears are fooled and how all sorts of cognitive biases come to play when comparing something as subjective as sounds.

So let’s start with cabling. We at TRPTK use some very expensive, high-end cabling. Our microphone cables alone cost more than most microphones of even your top-tier recording companies. We use power cables you can buy a really nice albeit second-hand car for. Are they worth it? Oh, absolutely. Do they make sense for everybody. Absolutely not. Only in very high-end systems will you be able to hear differences between most cables (unless you’re comparing top-tier Furutech with some 20-year-old guitar patch cable or something), and then again, lots of people have sufficient hearing loss due to age or lasting exposure to loud sounds, that they’ll not be able to discern any difference.

These things are for going the extra mile. Pushing the last one or two percent of sound quality out of the already ultra-high-end equipment you have.

Will you hear the difference? Maybe, maybe not. It depends on so many factors that one decisive answer cannot be made, even by the strongest of opinions on Reddit.

Now, to get further into things that make you go the extra miles, on a lot of our newer recordings we use the Furutech NCF Boosters extensively. These devices, made out of a special nano carbon-ceramic formula, lift our cables – both microphone and power – off of the floor, stopping any microphonics and interference that might arise. They also have Furutech’s NCF technology on board, which has some very interesting qualities I might get into in a later blog.

We use the Furutech NCF Booster Signal units to elevate our microphone and power cables from the floor, and cleaning up the signal with their NCF technology on board.

All in all, we do these things to get the absolute cleanest, purest signal into our recordings, and into your listening rooms. And we hope you enjoy the end result.