Music for piano and percussion. A duo with without a lot of repertoire, but nonetheless a duo that has the ability to be much more expressive and explosive than any other duo imaginable. The beautiful sonority of a big Fazioli concert grand piano and a collection of the most interestingly varied percussion I’ve ever seen, lay the basis for this album titled The Collectors, named after the piece the duo commissioned composer Moritz Eggert to write for them. 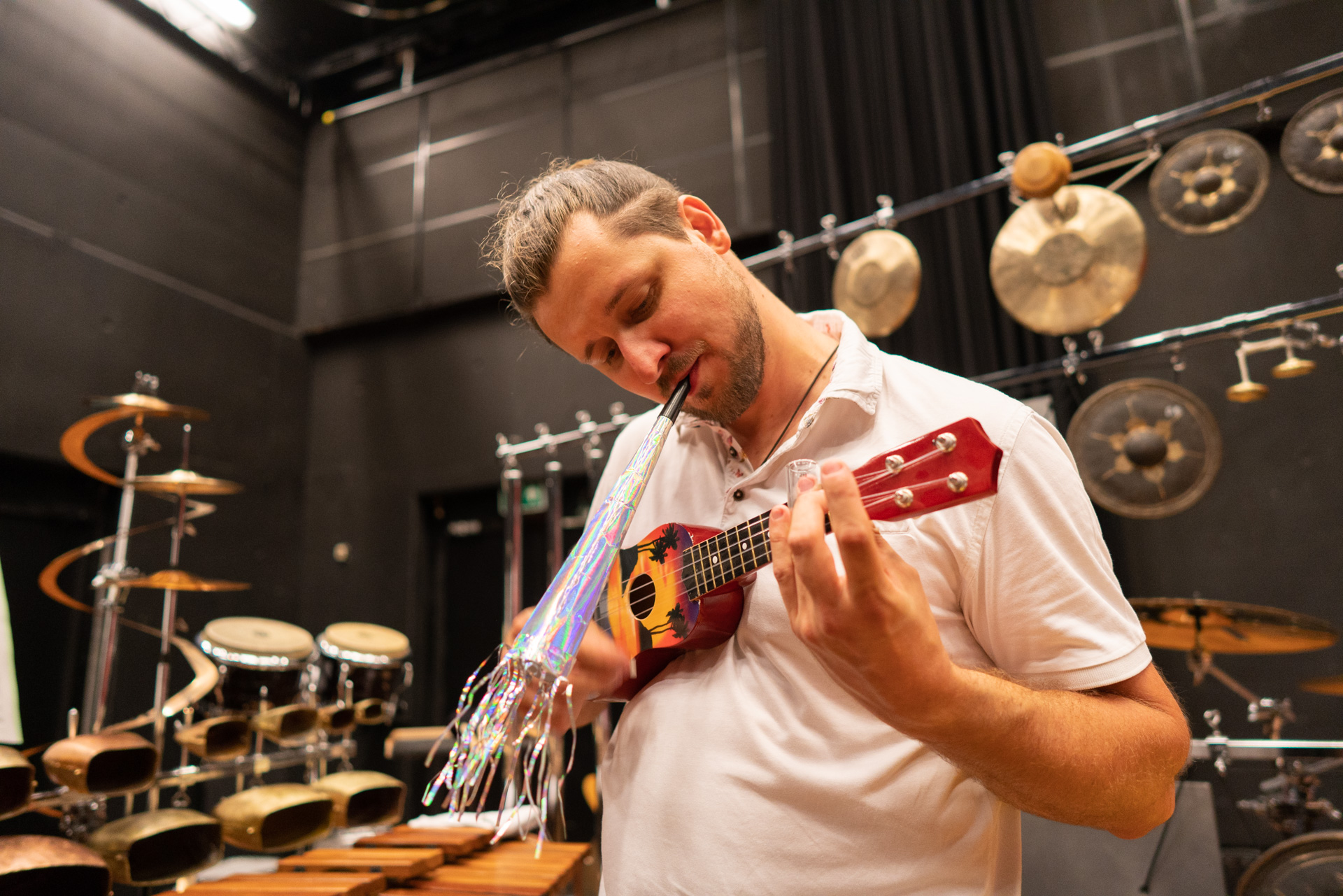 This photo just oozes professional music-making, doesn’t it? Konstantyn Napolov with a ukelele and one of those party-thingies.

In this piece, Konstantyn Napolov and Eke Simons play on not just their “own” instruments – percussion and piano respectively – but also on a huge array of gongs, toy instruments, kazoos, so-called “moo-boxes” (look them up, fun stuff!), effects and what not. The result is a comical, grand, and most of all fun collection of music, unlike anything I’ve ever heard.

Theatrical music in a theater

For this debut album of Konstantyn and Eke, they chose to record at Het Nationale Theater in The Hague, the Netherlands. I was really happy with that, because the relatively dry yet very balanced acoustics gave me the ultimate flexibility to create my own balance without drowning everything in the reverb of the hall. Speaking of, the reverb of this particular hall at the Theater has a very fresh and sparkly quality to it, ideal for percussion. It never gets too harsh or loud, but it always has this nice twang to it on percussion. I can recommend everyone who wants to record a percussion-centered piece of music in a theater hall like this!

Het Nationale Theater, the place where we recorded. On the left you can see the piano with the lid removed. On the right, you can see the huge set of percussion Konstantyn used (there was actually more than in this photo alone!)

Setting up was a bit of a lengthy task, though. You can imagine with such a vast array of instruments and toys in the score, as well as electronics on tape (for Kyriakides’ piece Once there was) there was a lot to set up. The piano being the easiest one.

Speaking of the piano, for this album I had decided to have the company that supplied the piano and tuned it remove the lid. For those of you looking at the picture below and wondering why, here’s why: the lid does a lot of great things for concerts, but in a lot of cases it can actually hinder the sound quality for recordings. This has to do with, you guessed it, reflections. 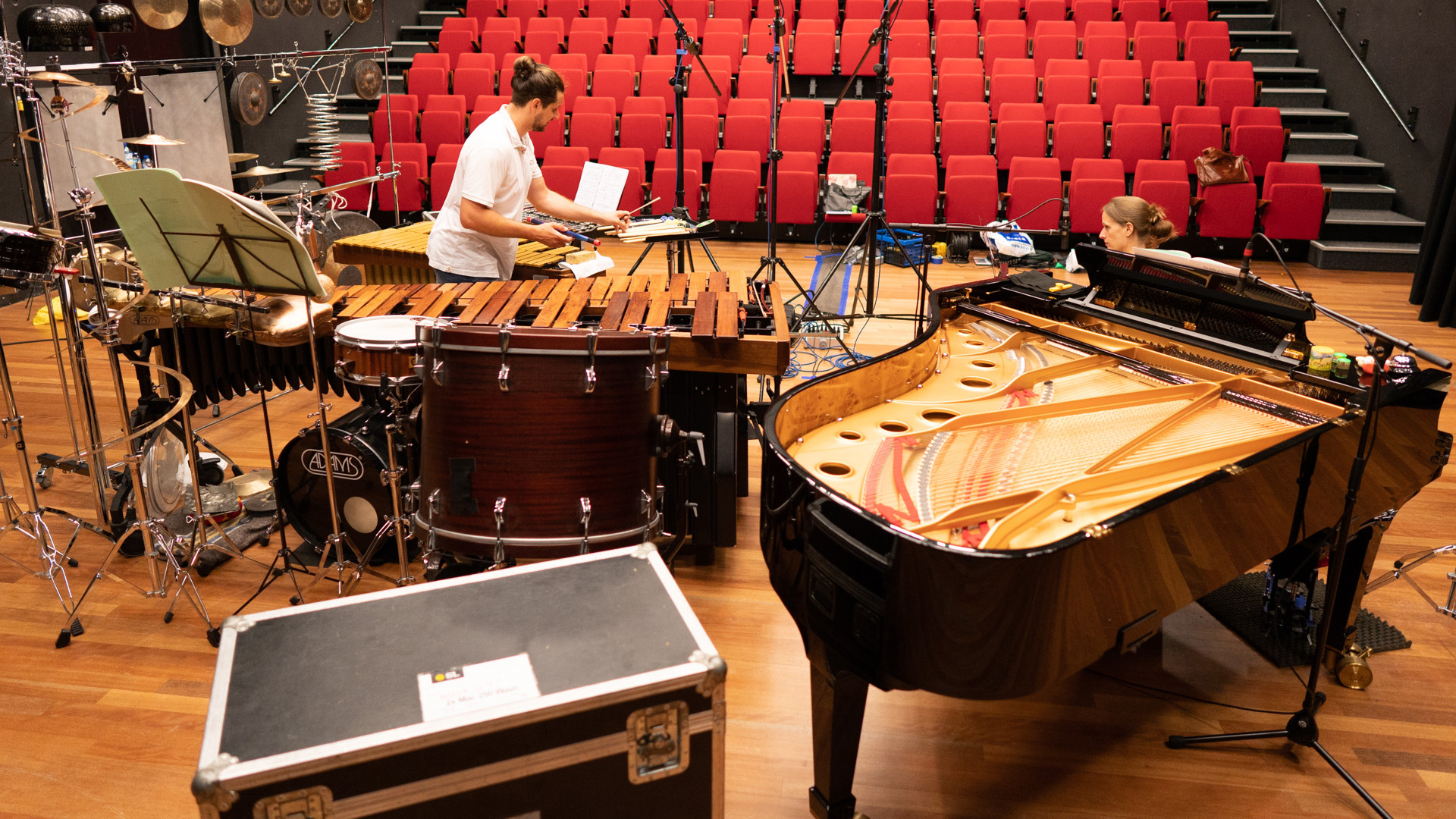 The piano with the lid removed. Positioned relatively close to the percussion set so that Eke and Konstantyn had good visual communication.

With the lid of the piano opened up, this lid projects the sound coming up from the sound board and strings forward into the concert hall, giving it more presence especially to people sitting more towards the back of the hall. Without the lid, the instrument becomes more omnidirectional meaning that all frequencies are scattered roughly the same in all directions. Much like percussion, actually. (You’ll probably guess where this is going…) By having the piano dissipate its sound in more or less the same way as the percussion does, it’s much easier to record them together and get a good natural balance.

Another benefit of removing the lid has to do with phasing issues – the sound reflected from off the lid travels a little bit of a longer distance but also ends up in the microphones. It therefore interferes with the direct sound, causing all sorts of things such as comb filters. That being said, because you usually hear a piano with the lid attached, that is the sound of the piano. Sometimes you actually want these comb filters. In this case, we didn’t, though.

“So how many mics did you use?”

Appending this blog a few years after the actual recording, I pondered over the questions I’ve received about this specific recording. One of the most common ones was “How many microphones did you use?”. My response to that always is, “How many do you think I used?” to which the answer is always way more than actually used. When I tell them the real answer (read below for that exact answer in more detail), they always say “Well those must be great microphones then, because I can hear every little detail!” 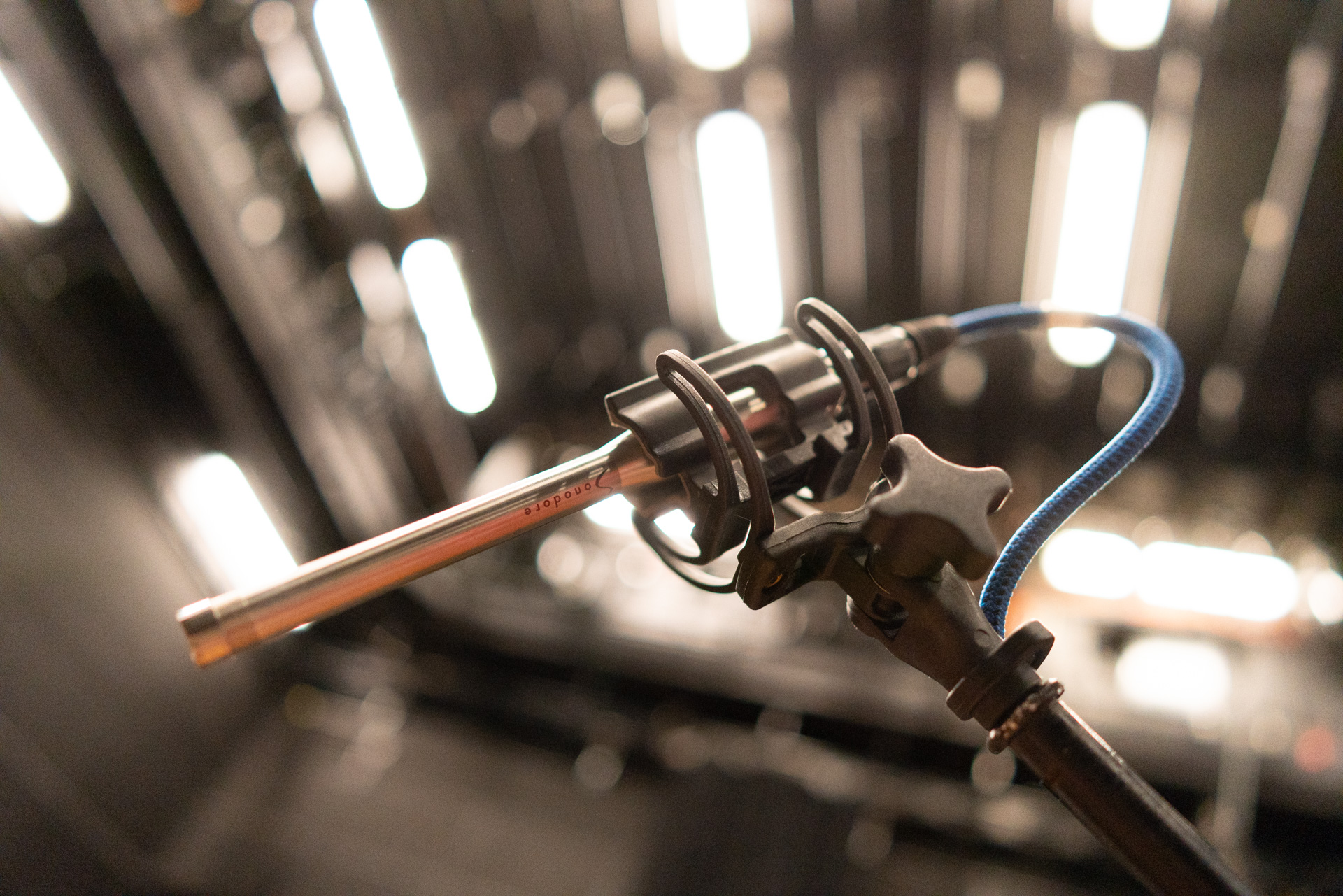 One of the microphones we used (yes, we used more than one), the Sonodore RCM-401 60V active-powered omnidirectional microphone. Used here with a custom Furutech microphone cable developed for us.

Well, yeah, the microphones are great. But that’s not (only) what makes you hear all these little details. It’s all about the acoustics, the positioning in the room. We just happened to record this in a place that had fantastic acoustics for something like this – dry enough for all those details to not get lost or eaten away in the reverb, yet reverberant enough to still make sense of it. That, my friend, is the secret sauce that made this recording one of my favourite ones. Because finally, I get to say, it’s not about the tools nor is it about how we used them. It’s about finding the perfect place for magic to happen.

Recording sessions are tough. You know that, I know that, artists know that. But this specific session was just insane. You have to understand this programme is physically exhausting for the players to perform. Konstantyn Napolov was on his feet literally the entire day, moving across his percussion set every half second or so. Do this for four days straight, and you have a recipe for severe physical exhaustion in hand. And that’s not even counting the mental exhaustion of keeping perfect focus on these incredibly complex pieces for four days straight as well. 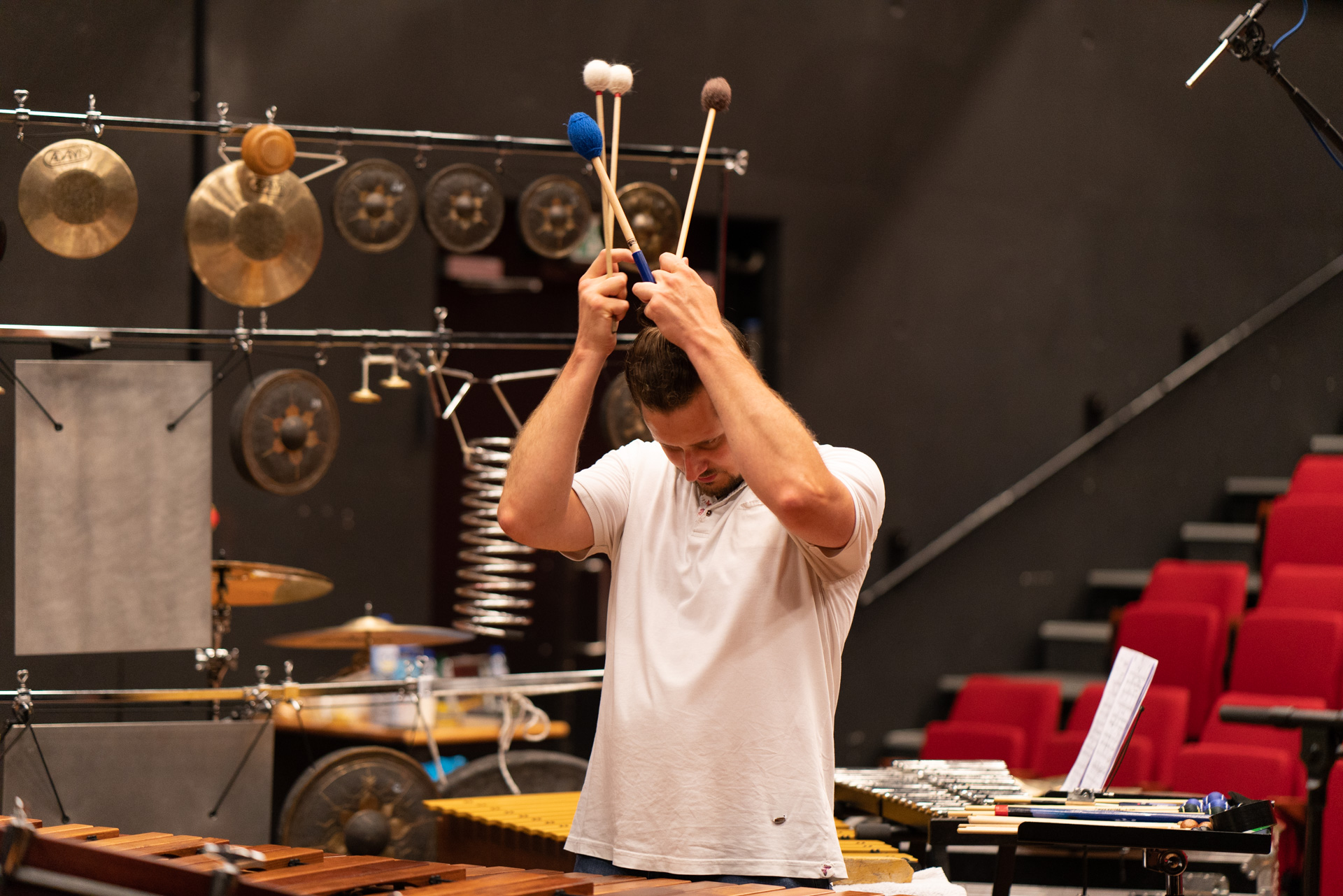 Konstantyn after a long and hard recording session.

For most of the pieces, the composers joined in on the recording too. Which is great, of course! Composers can bring so much knowledge about the pieces to a session and hear things that might slip the ears of even the most skilful musicians or sound engineers alike. That being said, this of course also adds to an additional sense of pressure to the musicians – they want to perform perfectly for the composers who wrote these masterpieces!

To me, this is one of the most important tasks of any recording producer such as myself, and it’s often overlooked by many listeners and musicians alike: the one keeping the session flowing, but also knowing when to stop or take a break. Resolving possible tensions between musicians should they arise (which is inevitable in most recordings; just imagine spending four days locked in a space with another musician, pouring every bit of energy, focus and dedication into making the perfect recording). All of these things are important for a recording producer to foresee and to guide the session into a place for each person involved in the session to feel their absolute best, whilst keeping an eye on the prize – the actual end result.