I just got back from this recording session and just had to write about it. It’s just been so much fun to work with these incredible musicians and composer Paul Edward Gay, who’s written songs based on poetry by Robert Frost, Emily Dickinson, and himself. On piano was Artem Belogurov (who’s already building up quite the catalogue on our little label, with titles such as Introductio by his Postscript quartet and The Fiery Angel with Maya Fridman). The singers were Shea Owens (baritone) and Madison Leonard (soprano).

Out of the eleven songs recorded, ten were with solo voice (varying between Madison and Shea) and one was a duet between the two. All songs were accompanied by Artem on piano.

To record these beautiful songs at, the four chose the Westvest90 church in Schiedam, in the southwest of our country (near Rotterdam). This church is famed for its very well-balanced acoustics – not too overly acoustic, yet what’s there is very warm and pleasant to the ear. This is mainly due to its relatively humble size and the fact that most surfaces are made of wood. Another great benefit of this church is that you’re able to move the benches, making you able to shift the acoustics by a fair amount (upholstered pews are probably the biggest source of acoustic absorption in a church). 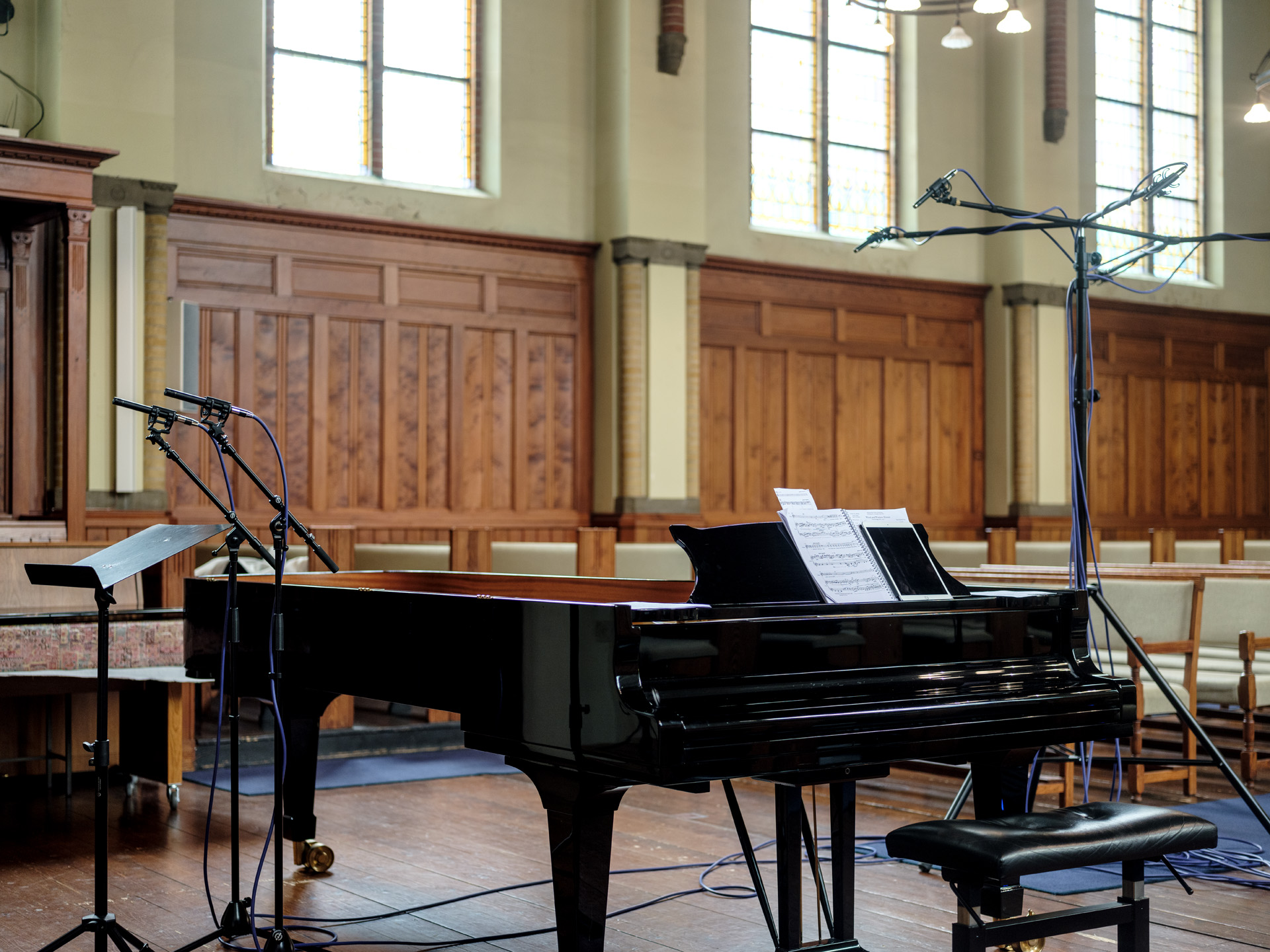 I unfortunately didn’t have my wide-angle lens with me, so this shot probably represents the room as well as was possible at the time. In this image, you can see the magnificent Steinway Model D concert grand piano as well as the seven microphones we used.

In this case, we wanted the recording to have some more intimacy, so we didn’t move the pews back. This resulted in slightly dryer acoustics in the recording space, bringing more focus to the voices and piano.

The Westvest90 church in Schiedam is most known for the incredibly beautiful, 2.74 meter (about 9 feet) long, Steinway Model D concert grand piano that resides there. Tuned and serviced to absolute perfection by Matthijs Jongepier from Vapushtara Piano Service, it really was a joy to record on.

A close-up look at the fantastic Steinway Model D-274.

As you can see in the image above, we decided to remove the lid from the piano entirely. The lid is very useful in a concert setting: it projects the sound into the audience, creating clarity and volume even for the people in the back of the hall. However, sometimes for a recording you might want a more mellow, diffuse sound – which we did for this album. You see, the songs we recorded were, well, songs. It’s all about the singers here, and the piano should – in my opinion at least – keep a lower profile in the recording. It still needs to be in balance, yes, but we were looking for a more gentle sound, to really let the voices shine through.

Searching for the perfect sound

Everything in life should be in balance, and so should be a recording. The huge concert grand piano can easily overpower most instruments, even with the lid off. We therefore chose to put it closer to the microphones and have the singers be farther away.

“Huh?!” I might understand is going through your mind right now. Let me explain.

For the piano, aided by removing the lid, we wanted a spacious, slightly diffuse sound to serve as a bed for the voices to sit on top of. The voices, however, we thought should be more upfront, more intimate, yet still with plenty of lush, diffuse reverb from the hall. Whenever I’m going for a sound like that, I choose to have the piano being picked up only by the main microphones, slightly farther away than I normally would, with the voices (or whatever instrument I want to combine it with) behind the piano but with a spot microphone. You then combine the reverb from the voice the main microphones pick up with the closer, more intimate and warm sound of the spot mics, and voila! You have the perfect combination of closeness, warmth and intimacy. 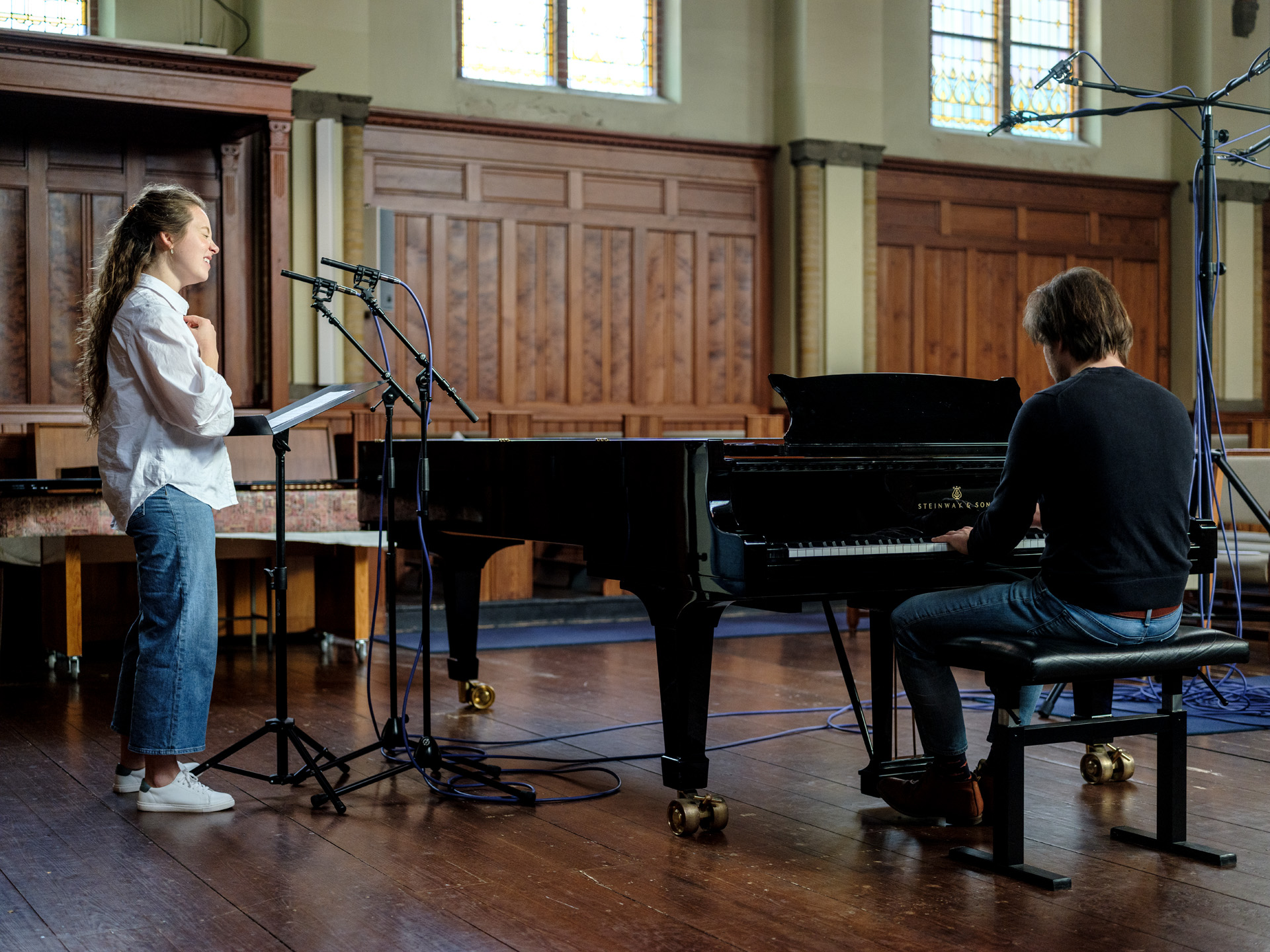 As you can see here, there are no spot mics on the piano but there are two on the voice. By using a stereo spot miking technique rather than a single one, you create a slightly less focused, warm soundstage for the voice.

In terms of equipment, we worked – as always – with our set of five factory-matched DPA d:dicate 4006A omnidirectional mics in a five-channel OOA (optimized omnidirectional array) setup. (I’ll soon upload a blog series on what this OOA actually means, how it works, and why I love using it so much.) 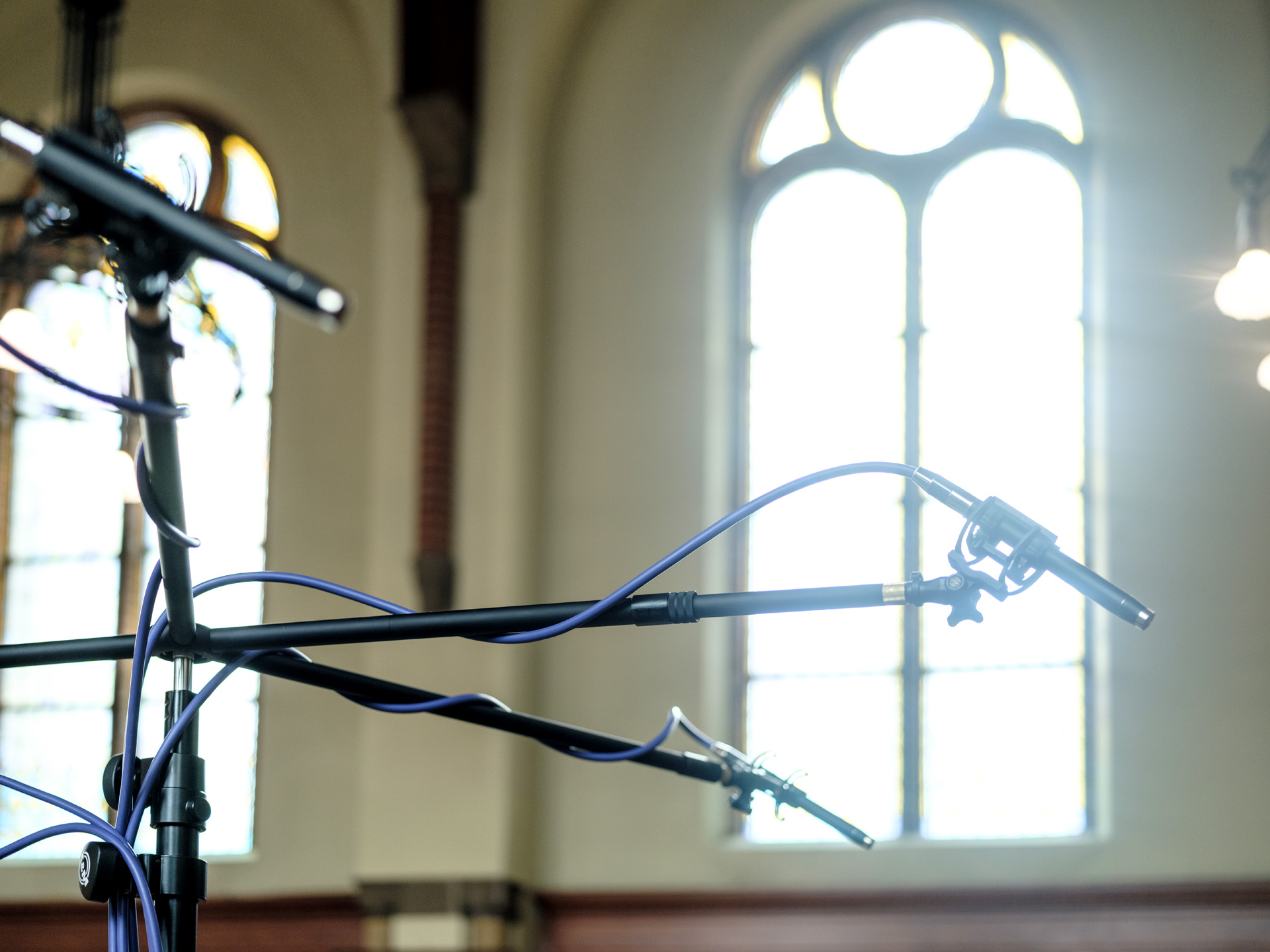 (Three of) five main microphones, the DPA d:dicate 4006A omnidirectional microphones, here used in our OOA system. All our microphones are connected to their preamps using custom-made Furutech microphone cables with carbon fiber and rhodium connectors.

The five main microphones were aided by the DPA d:dicate 4015A subcardioid microphones for the voices. Why those microphones, you might wonder. Well, this has to do with three of their characteristics. 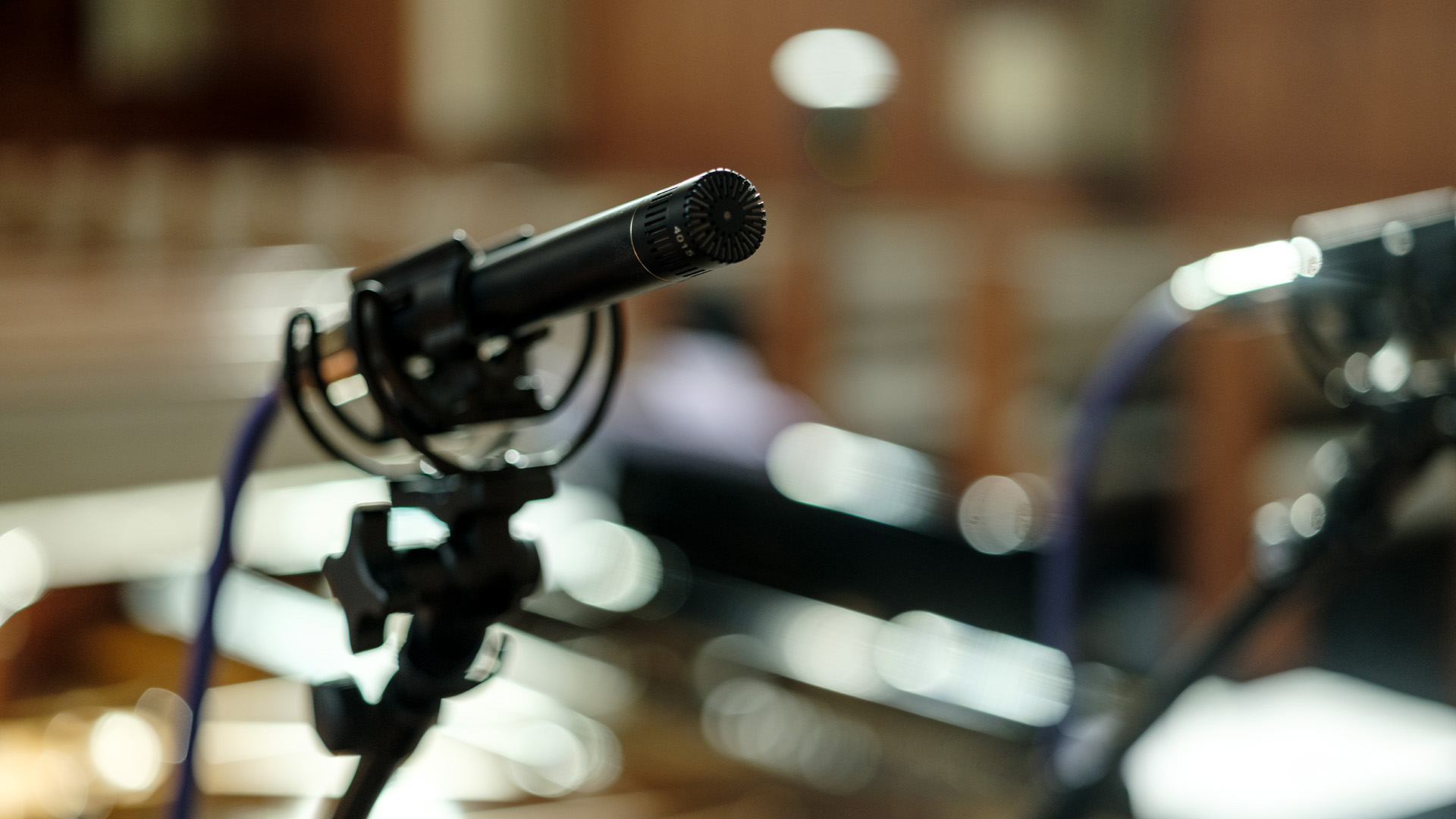 The DPA d:dicate 4015A subcardioid microphone, on a Rycote lyre-shaped shockmount. I’ll write more about these shockmounts in a separate blog at a later point.

One aspect of it is that – usually – subcardioid microphones (otherwise known as wide cardioids) have a more natural frequency response and are less prone to the so-called proximity effect. This effect is noticeable in cardioid and figure-eight mics, where low frequencies are hugely boosted when picking up something close. Subcardioids have much less of this effect, and generally have a much more flat frequency response than their cardioid counterparts.

Lastly, these DPA 4015As specifically just blend so well with our DPA 4006As we use for the main microphone system. So well even, that the sound doesn’t even seem to change when engaging these microphones in your mix. Things just get more focused, that’s all.

It’s for these three reasons we love working with the DPA 4015A mics as spot mics. Yes, of course, you have less separation (more so-called bleed) than with cardioids, but they just sound much more natural and blend perfectly well together with our main mics. 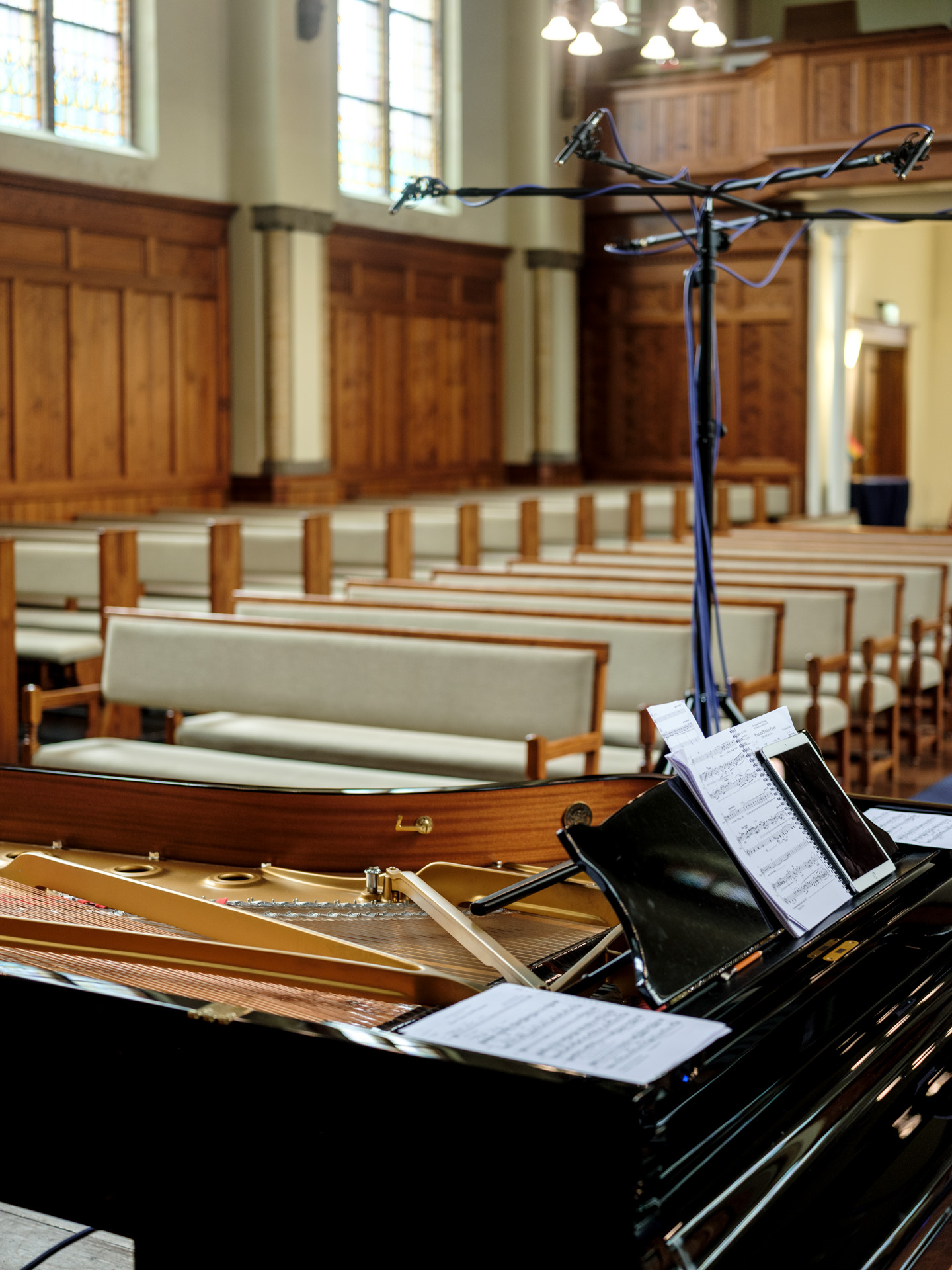 A final shot of the piano, the main microphones, and the church itself, for your enjoyment. I hope you enjoyed reading this blog.